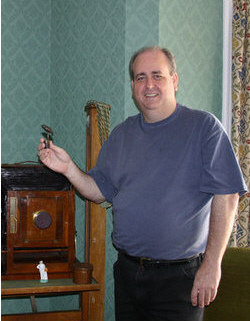 Marcel Safier was born in Southport, Queensland on Australia’s Gold Coast. He developed an early interest in photography through using his mother’s Kodak Box Brownie, although he quickly progressed to a Minolta SR2 SLR camera, a Minolta SRT 101B and then to the Canon SLR system. At 15 his interest in old photographs was stimulated by delving through his mother’s and aunt’s old photographs, then receiving a gift of his old Scottish family’s photographs from a relative. It was a cabinet photo amongst those that most drew his attention. A year later he acquired some old photos from an antique shop and he has collected them ever since. Parallel to this he has avidly researched his Scottish, English, Welsh, Irish and Polish ancestry.

In 1984 Marcel graduated in Medicine from the University of Queensland and now works as a General Practitioner on Brisbane’s south side. In 1992 he purchased a 19th century family photograph album containing Brisbane studio portraits and he became more curious about local photographers. It turned out the grand children of two of the photographers whose work was in the album were patients of his. Ever since then he has keenly researched the lives of Brisbane photographers, using familiar genealogical techniques. This research eventually extended to photographers from other parts of Queensland, then Australia, New Zealand, Great Britain and Ireland, South Africa and North and South America and contact with many hundreds of descendants and relations of 19th and early 20th century photographers.

Through their mutual interests Marcel began corresponding with Ron Cosens, Britain’s major carte de visite collector in Yorkshire which eventually led to a meeting in 2005, and then many times since with a continuous exchange of ideas, data and photographs. Along with Sandy Barrie of Ipswich, Australia, Marcel has an ongoing involvement in the database of British and Irish photographers maintained by Ron Cosens.

Marcel is currently researching for a book on the history of the carte de visite and cabinet photographs in Australia, a book on the history of photography in Brisbane and co-authoring a book on the Holterman collection of New South Wales goldfield’s negatives with Alan Davies. He has also been researching street and candid photographers from the 1930s to 1950s for a possible future book! Marcel is the major contributor to a substantially revised edition of “Australians Behind the Camera” by Sandy Barrie that is still in preparation. Marcel is a past President of Cameraholics (Photographic Collectors Club of Queensland) and the Queensland Card Collector’s Society Inc and a member of the Australian Photographic Collector’s Society, the Photographic Collectors Club of Great Britain, The Daguerreian Society and the Photographic Historical Society of Canada. He still enjoys taking photographs, especially at music concerts as music is his other big passion. Marcel is a keen user of the digital medium despite owning many usable film cameras and currently shoots with a Canon G15, an Olympus Stylus 1 and a Sony A7III.

Marcel can be contacted by email at msafier@ozemail.com.au and is always happy to hear from the descendants of 19th century and early 20th century Australian, New Zealand and Pacific photographers. He has a website at http://members.ozemail.com.au/~msafier and is active in many Facebook photohistory related forums.