First camera at age 8 and first darkroom at age 9.

Completed a College of Art Photography course in 1973 and “Thought I knew about photography until I started at the famous Ranald Simmonds Studios in 1974, on a Kodak Century Studio 10”x8” camera. That really taught me photography the hard way, shooting baby portraits by available light at one eighth of a second.” Sandy has photographed over 2,000 weddings. 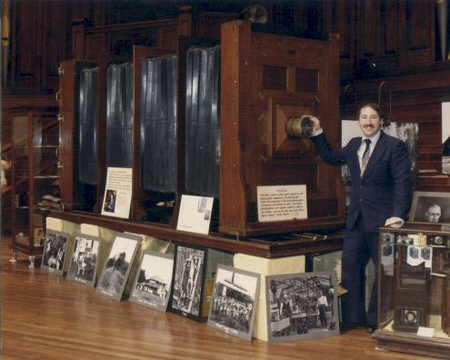 Sandy has published several manuscripts on early professional photographers in Australia. In 2001 he published “Australians Behind the Camera. A Directory of Early Australian Photographers”.

Sandy has also acted as a photographer in “The Stinson Story”, a recreation documentary and also as Photographer No.2 in “Deluge” the story of the great Brisbane flood of 1893.

Despite being so interested in the history of photography, Sandy took some of the very first digital portraits in Australia as long ago as 1986.

A major contributor to this website, Sandy has been compiling lists of British photographers from a mountain of trade directories over the past 35 years