In the 1871 census Henry described himself as a picture frame maker living at 52 Parker’s Row, Dockhead, Bermondsey. He is known to have produced photographic portraits with this address printed on his carte de visite mounts (see the Gallery at the end of this biography). Henry’s career as a photographer, therefore, began after 1871 but prior to 1876 when he opened a different studio at 14 Jamaica Road, Bermondsey.

Eventually, Henry had various other studios in London and had five sons involved in the business.

In 1919 he was succeeded by his son Charles Bown.

1851 – age 10 – living in Lambeth, London with parents John Bown and Sophia Bown and three siblings
1861 – age 20 – his father’s census return does not include Henry

1849 In April 1849, Henry, Charles and William were all baptised together at St. John the Evangelist church in Lambeth.

1851 Henry, aged 10, was living at 8 Pear Tree Street in Lambeth, London with his parents John Bown, a tailor journeyman, and Sophia Bown and his brothers John, Charles and William.

1864 (c.) Henry was presented with a little sister called Anne Maria Bown. She was born in Lambeth, London.

1865 (c.) About a year later, Elizabeth Bown was born in Lambeth, London. In 1884 she married Albert Victor Ranford (1864 – 1941); she was described as a photographer and he was a 20 year old gas fitter. He later took up photography professionally and had two studios in London in the 1900s – no doubt benefiting from his wife’s expertise.

1870 By 1870, another son, William Charles Bown was born in Bermondsey, London. William also became a photographer.

1871 In the census of 1871, Henry, who was aged 30, is recorded as a picture frame maker living at 52 Parker’s Row, Dockhead, Bermondsey. He is known to have produced portraits with this address printed on his carte de visite mounts (see the Gallery at the end of this biography). His photographic career, therefore, appears to have begun sometime after 1871 and prior to 1876 as he opened a new studio at a different address in 1876. It is assumed, therefore, that he started in photography between 1871 and 1875.

1873 By 1873, son number three was born in Bermondsey and was called Samuel. Samuel Bown later became a photographer and had a studio at 116 Walworth Road. To date, no trade directory advertisements have been found for Samuel at this address but the photograph below has been professionally dated by Jayne Shrimpton www.jayneshrimpton.co.uk to circa 1912. The pose is very artistic/stylish – not typical of ordinary family photographs from this era – and it is thought that the lady in the photograph could be a photographer’s model, or perhaps even a member of the Bown family.

A painting from 1912 by William Strang shows a similar, fashionable hat from the period – see below 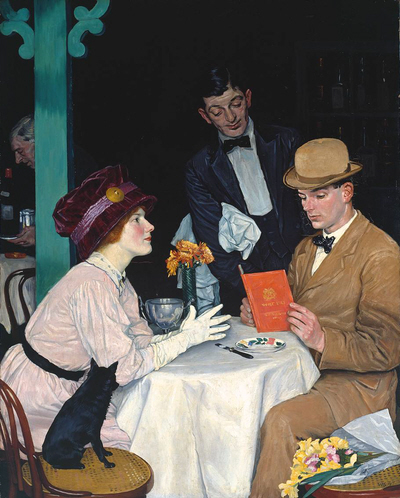 Samuel was living at his father’s studio at 63 Spa Road, Bermondsey in 1891 where he was stated to be the brother in law of the head of household, Albert Victor Ranford, who was also named as a photographer.

1876 In 1876, Henry Bown senior moved to a new studio at 14 Jamaica Road, Bermondsey. This was a further step in a long and successful photographic business which employed him and, in due course, his five sons as well. Henry was also a carver, gilder and picture framer so provided a rounded and complementary service for his customers. No cartes de visite have yet been found with this address on.

1876 In 1876, a new baby, Arthur Bown, arrived and the family was still living in Bermondsey. Arthur, later on in life, had a studio in his own name in Clapham, London.

1877 By 1877, another new baby girl, Esther Bown, was born whilst the family were still living in Bermondsey.

1877 Henry appears to have been a Freemason of the Harrow Lodge (Harrow Lodge 1310) and remained so until at least 1896. However, unlike many freemasons, he did not advertise the fact on his photographic mounts.

1879 Henry and Anne continued to add to the family and Charles Bown was born in 1879 in Bermondsey, London. Charles, when he grew up, also had a studio and likewise his son after him.

1881 The census shows Henry, aged 39, living at 52 Parkers Row, Bermondsey with his wife and seven children. Interestingly, both of the older girls, Anne Maria and Elizabeth, are shown as 17 and 15 year old daughters respectively – but are also described as ‘servants’.

1882 Henry and Anne had their last child, a daughter, Mary Ann Bown in 1882 in Bermondsey, London.

An interesting and unusual example of one of his carte de visite portraits is shown below – interpret as you will. 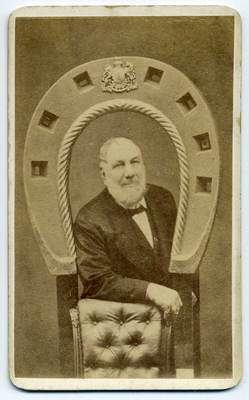 1886 By 1886 Henry had opened an additional studio at 13 Rockingham Street, Newington Causeway, Southwark, London SE but this remained open for only two or three years. Again, no cartes de visite have yet been seen with this address on.

1888 By 1888 Henry had closed the Rockingham Street studio and opened one at 43 New Kent Road in Southwark. Interestingly, the studio was updated and electric light was installed in December 1890. This studio became one of the main studios in the business and stayed open until at least 1920 when it was taken over by Brown, Pruce & King sometime before 1922.

1890s In the early 1890s Henry operated out of Cold Norton and Purleigh, both in Essex, but it is not clear for how long as he did not appear to have advertised in trade directories. However, details on carte de visite mounts show that he could only have been operating at these locations between 1890 and 1894. The fashions of the sitters in various examples support these dates.

1891 In the census in 1891, Henry aged 50, was recorded as a photographer and living at 36 Avondale Square in Camberwell, London with his wife Anne and his children William Bown (21), Arthur Bown (15), Esther Bown (14), Charles Bown (12), Mary Ann Bown (9) and a 22 year old servant named Alice Langham who was born out in the countryside at Great Barton in Suffolk. William was described as a photographer and Arthur as an assistant photographer.

1893 Life was not without its ups and downs as Henry was sued by his assistant Frank Smith on October the 26th for £4 wages in lieu of notice – but the case was lost.

1893 Henry senior appears to have made a big move in 1893 when he opened a new studio at 14 Wisteria Road, Eastdown Park, Lewisham SE in London. The date of 1893 is deduced only from the design of and details on Henry’s carte de visite mounts as he does not appear to have advertised it as a studio. The address was described as a studio and as a copying and photo printing works and its main purpose may well have been to service all of Henry’s studios at that time.

Henry was involved in at least sixteen studios between the 1870s and the early 1900s.

1896 In 1869 David Rees had opened a studio at 298 Clapham Road, Lambeth and it was subsequently run by Rees Brothers & Sons and then Rees & Pitcher until about 1896. This well established studio was then bought by Henry Bown and run at that address until the early 1920s when it was handed over to Charles Bown.

1901 In the 1901 census Henry, aged 60, was listed as a photographer living at 14 Wisteria Road, Eastdown Park, Lewisham, London. This is the address of the studio, copying and photo printing works he opened in 1893.

1904 Henry re-married on the 4th of April 1904. He married Marion May Brokenbrow who was a 19 year old living in his home at 14 Wisteria Road. Ethel L Brokenbrow and C Brokenbrow signed as witnesses at the wedding which took place at the Baptist Chapel, College Park, Lewisham. Henry and Marion’s marriage certificate is shown below. 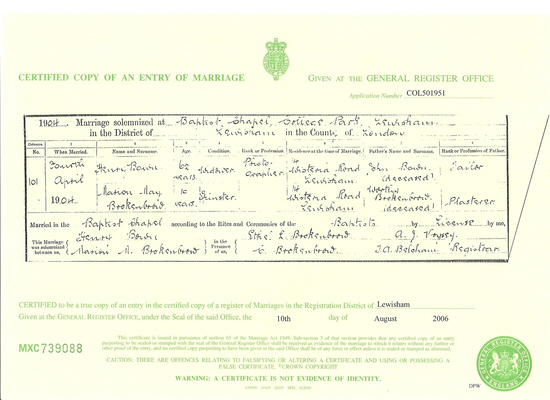 1906 Sadly, Marion died just two years after their marriage on the 26th April 1906 at home at the age of 21. She died of pulmonary tuberculosis and was buried near Henry’s previous wife at Ladywell & Brockley Cemetary in Lewisham.

1906 Henry was not in good health by 1906 and wanted to retire so he registered a limited company, H Bown Ltd. in December of that year with a Thomas Isaac Grimes to whom he lent £1,000 for the purpose. Henry’s intention was that the limited company would own the studios and some of his outlets certainly traded under the name of the limited company for a short time but reverted to trading as Henry Bown soon afterwards.

Thomas Grimes turned out to be a poor choice of associate.

1906 Henry junior, Henry Bown’s son appears to have left the business at this time and opened two studios of his own at 400 Evelyn Street, Deptford and 116 Walworth Road, Southwark. Confusingly, his carte de visite mounts named him as Henry Bown as well; as opposed to Henry Bown junior – perhaps understandable as he would have been about 45 at the time.

1908 Henry married another younger lady, Annie Mary Pendergast, in 1908. Annie Mary had been born in Castlemartyr, County Cork in Eire about 1884. She was 42 years younger than Henry.

1909 There was an interesting court case mentioning Henry Bown and Grimes on the 12th. January 1909 at the Old Bailey as follows:-

1911 The census shows Henry Bown, aged 69, living in a seven room house at 29a Stockwell Park Road, Brixton, London SW with his 27 year old wife Annie Mary Bown and a 19 year old servant named Lizzie Hambelton who had been born nearby in Wimbledon. It is not clear if these premises were still used as a studio at that time as they do not appear to have been advertised then. The last time they were stated as being occupied by a ‘firm named Bown’ was in the 1909 court case mentioned above.

1912 By 1911/1912 Henry had rationalised his business and had closed all of his studios except for 43 Kent Road and 298 Clapham Road, these two important studios remaining open until the 1920s. 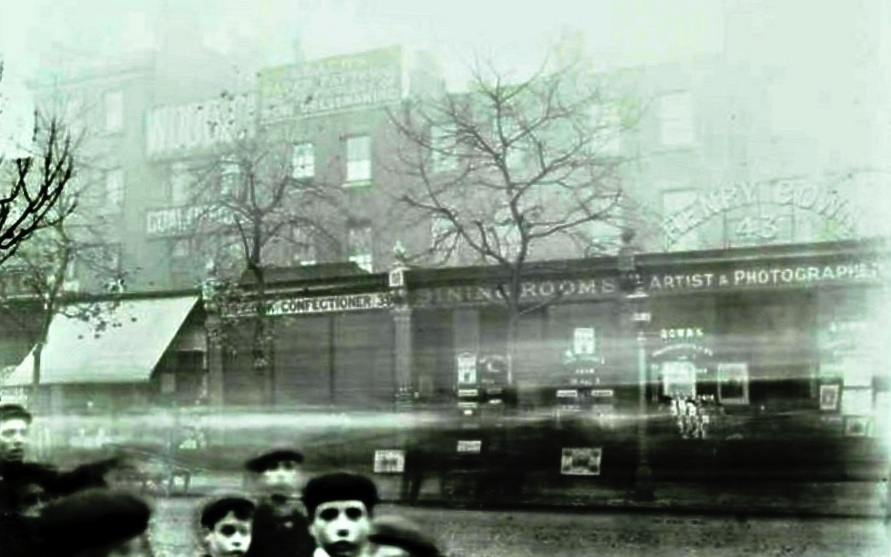 1912 On January 18th 1912, Henry’s debtor, Thomas Isaac Grimes; was due to be discharged from bankruptcy but his discharge was suspended for 10 years (Photographic Dealer February 1912). It would appear that Henry’s loan was lost and gone forever.

1921 Henry died of a cerebral haemorrhage at his home at 29a Stockwell Park Road, London on the 2nd. March 1921. His daughter Esther was with him. His occupation was given as a Master Photographer and his age noted as 79. See his death certificate below:- 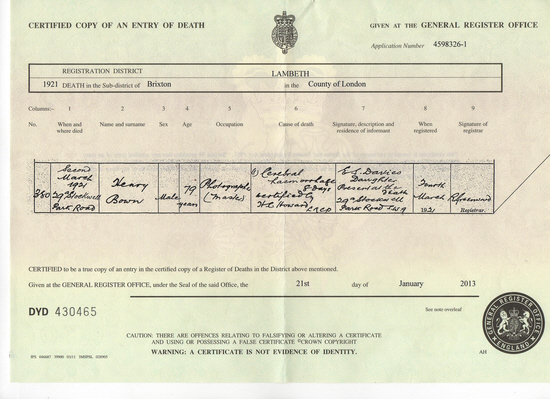 A notification from Henry’s executors asking for claims against Henry’s estate appeared in the London Gazette on the 29th. April 1921. 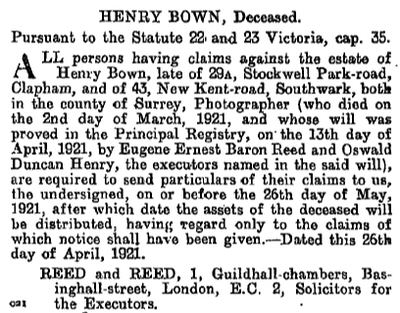 Other photographers in the family

Examples of Henry’s photography are shown below. 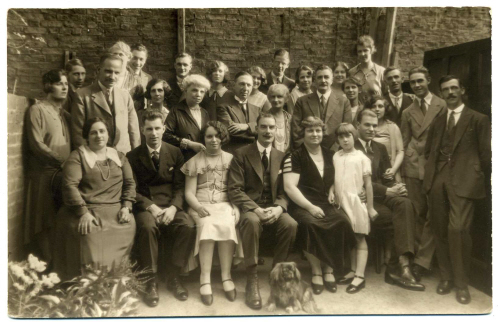 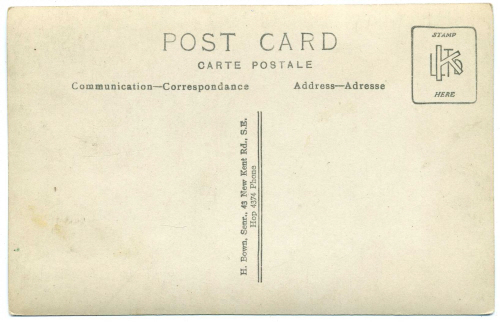 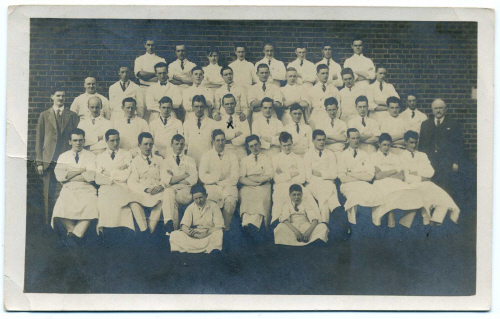 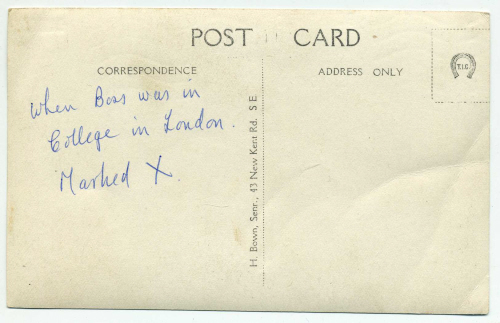 An example of H Bown Ltd’s photography is shown below.