First established around 1856 in Boston, Lincolnshire. He later opened a studio in Alford and trained his sons Sam and John and daughters Elizabeth, Clara and Emma in photography. Emma married photographer Charles Sheppard Smyth.

1833    John moved from his native Suffolk to Leicester where he married Jane Coleman in 1833. They had four children there before moving to Lincolnshire where they had another four children. The family eventually settled in Boston where John worked as a cotton winder.

1856    John took up photography in his mid 40s around 1856 when the ambrotype was gaining popularity over the daguerreotype which had reigned as the predominant medium for portrait photography for some 15 years and was on the wane.

John’s children no doubt learnt the trade in their father’s studio. Samuel and Elizabeth worked as photographers in Burgh le March

1867   Samuel published an interesting advertisement in the Stamford Mercury on the 6th September 1867 concerning his studio in Alford but also mentioning his mobile studio van that visited Skendleby on Thursdays, Fridays and Saturdays. The advert is shown below.

1869    John’s son, Samuel suffered an untimely death in 1869 and John had to sort out Samuel’s financial affairs – see the newspaper report below.

John Starbuck continued to work in Alford assisted by his daughter Clara and son John. Emma married photographer Charles Sheppard Smyth and worked with him in Alford.

John seems to have retired from photography in his early 60s and his son John Bissell Starbuck appears to have continued the business before establishing a short lived partnership with Edwin Nainby, who had married John’s sister Mary Jane. Nainby remained active in photography in Alford for some years while John Bissell Starbuck worked in a variety of locations in Lincolnshire.

1883    John Starbuck senior died in 1883, his wife dying five years later in 1888. Although she was the beneficiary of his business in John’s will Clara married a Baptist minister and relocated to Barlestone, Leicestershire.

Last Will and Testament of John Starbuck

I John Starbuck of Alford in the County of Lincoln Photographic Artist declare this to be my last Will and Testament I release my son John Bissell Starbuck from the payment of so much of the sum of One hundred pounds and interest secured by an assignment of his interest under the Will of Samuel Coleman as shall be owing at my death I bequeath to my Daughter Clara Starbuck all the stock pictures fittings goodwill book debts and other things belonging to or used in my business subject to the payment of the trade debts thereof I devise all my real estate to Samuel Muston Butcher and Robert Kemp Chemist both of Alford aforesaid Upon trust that they or the survivor of them or the heirs of such survivor their or his assigns hereinafter designated my Trustees to sell the same and divide the net proceeds after discharging the expenses of the sale thereof and the Mortgage debt thereon equally between my Daughters Clara Starbuck, Susannah Starbuck and Emma the wife of Charles Shepherd Smyth for their sole and separate use respectively Provided always that my Wife shall have the option of occupying at the rent of eight pounds a year the dwellinghouse in which I reside at the date hereof for so long as she shall choose and that as long as she shall so occupy the said dwellinghouse the sale of the said house and the adjacent dwellinghouse and premises shall be postponed and I direct the said Trustees to receive the said rent of Eight pounds the first payment whereof shall become due at the expiration of one year from my death and to let the adjacent dwellinghouse and premises from year to year and divide the said rents after paying for the Insurance thereof against loss by fire the interest on the Mortgage and other expenses equally between my said Daughters I bequeath my consumable household stores and provisions to my said wife I bequeath my household furniture books and all articles of household ornament and use and all the residue of my personal estate unto and equally to be divided by my Executors between my four Daughters Susannah, Mary Jane the wife of Edwin Nainby, Emma the wife of Charles Shepherd Smyth and Clara after payment thereout of my debts other than Mortgage or trade debts funeral and testamentary expenses I appoint the said Samuel Muston and Robert Kemp Executors hereof I revoke all other Wills.

In Witness whereof I the said John Starbuck the Testator have hereunto set my hand this seventh day of March One thousand eight hundred and seventy eight.

Codicil to the Last Will and Testament of John Starbuck

Details of will provided by Jills Family Ancestry

Images provided from the Victorian Image Collection by  Ron Cosens 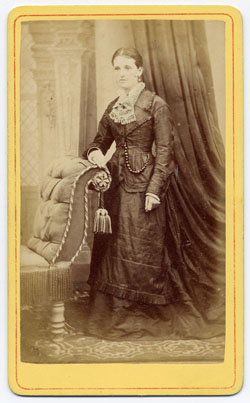 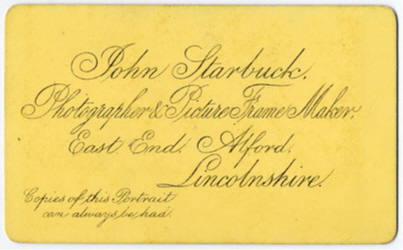