Apprenticed with his uncle photographer Walter Bradnee in Newton Abbott, Devon then set up his own studio in Exeter.

The family moved to Chaddesley Corbett in Worcestershire, the home town of Hannah not too long after William’s birth.

By the time of the family’s later move to Areley Kings, William became apprenticed to his uncle Walter Bradnee who had opened a photographic studio in Newton Abbott in South Devon.

William later set up his own studio about 12 miles to the north in Exeter.

William subsequently formed a partnership with Howard Trewent Heath (c.1865-1904) called Heath & Bradnee that was advertised from 235 High Street, Exeter from 1891 to 1939 although the firm was trading from at least December 1890 (copyrighted photo in National Archives, Kew). Heath was the son of Plymouth photographer Henry Heath of the firm Heath and Bullingham.

Heath seems to have left the business partnership as he appears as licensee of the Plough Hotel in Weston Super Mare in the 1901 census.

William Bradnee also advertised from the High Street address under his own name for a few years but continued using the business name Heath & Bradnee many years beyond Heath’s death in 1904 in Newton Abbot.

Heath & Bradnee photographed the town of Exeter as well as its people. The business folded in 1939 when William would have been 78.

William had an uncle, Walter Bradnee, who was also involved in the photography business. For more details, click here.

Images provided from the Victorian Image Collection by  Ron Cosens

We do not have any photographs taken by William Bradnee at present. Can you help?

However, please see below for examples of photographs taken by Heath & Bradnee – William was the Bradnee in the partnership. 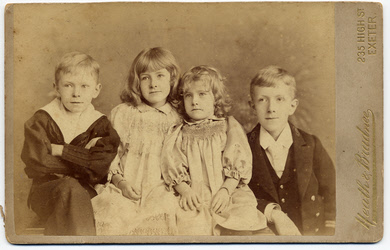 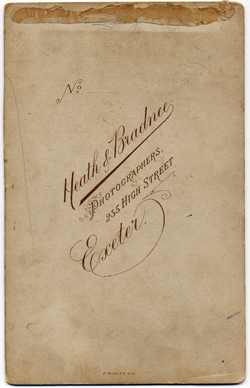