It was not until 1861, when he was about 27, that he was recorded as a photographer on his son’s birth certificate in Woolwich in London.

He had two different studios in London and then moved to Aldershot in Hampshire and opened a photographic studio there. His last advertisement for a studio was in 1880 when he was about 45 years old.

William’s other jobs included being a baker, in his early days, a music seller and, latterly, a publican and a boot maker.

In 1841 William, aged 6, was at Cockles Cottage, Charles Street, St. Paul’s, Deptford, Greenwich, Kent living with his with his family

Early records show that William Junior was also a baker as by 1851, aged 16, he was at Thames Street, Greenwich and his occupation was recorded as a baker. However, William had many occupations – as well as four ‘wives’, two of whom he married officially!

William married his first wife, Martha Ester Davies (1825 -1891) in St. Mary’s Church, Marylebone, London on the 23rd August 1856. According to his marriage certificate William was a house agent living at 8 Stingo Lane, Marylebone. William was 21 and Ester was 10 years older.

On the 8th September 1856, a few weeks after the wedding, Ada Martha Mary Heathman was born. William’s occupation on her birth certificate was given as ‘music seller’ and his address as London Road, Greenwich.

Ada was followed by Emily Amelia Heathman in 1859. Sadly, Emily died within a month of her birth.

Later in 1859, William was a baker in Trafalgar Road, Greenwich.

William’s studio in 78 Wellington Street, Woolwich was open in 1861 but by 1872 he was succeeded by Cobb & Challis.

William opened an additional studio in 1865 at 63 Wellington Street, Woolwich and this was advertised for several years until 1876 – so he had two studios open for a period of about 7 years.

Also in 1865, after only nine years with Martha, William was with a new partner, Georgiana Brimfield (confirmation of his marriage to this 2nd ‘wife’ yet to be found). William was 30 and Georgiana was 23. Georgiana was born in 1842 and died during childbirth in 1877 at the relatively young age of 35.

Whilst living at 78 Wellington Street, Greenwich (William’s photographic studio), William and Georgiana had a son, Henry Rowland Heathman, born in 1865, and another son who was born on the 14th August 1866 but he died immediately after birth and was not named. His birth certificate listed William as a photographer at the Criterion Studios, 77 & 78 Wellington Street.

By 1869, William had turned his hand to being the licensee of the Alhambra public house (later renamed the White Lion), Church Street, Woolwich. This means he was a publican and a photographer at the same time so must have had help with one or both businesses.

Two more children were born at 78 Wellington Street, Charles Edward Lindsey Brimfield, who died as a baby and Henry Heathman who was born in 1870.

In the census of 1871, Martha was living in Amersham Lane, Deptford with their three children Ada, William and Alfred. It appears that William had abandoned them.

In the same census, William and his second family, Georgiana and son Harry (almost certainly Henry Rowland Heathman), were at 56 Church Street, Woolwich, London where he was still running the Alhambra pub. He remained the licensee until 1872.

Another child, Florence Emma Heathman, was born in 1872.

On the 17th July 1874, a tragedy struck the Heathman family when Alfred George Heathman, one of the twins born in 1861, died from drowning in the Grand Surrey Canal.

Shortly after, Elizabeth Heathman was born on the 24th October 1874 at 63 Wellington Street, Woolwich but she lived only a very short time, dying of atrophic ablactation on the 22nd of November – less than one month old.

William appears to have sold his photography businesses by 1876 (when he last advertised a studio in Woolwich) and by 1877 the family had moved to Aldershot in Hampshire where he opened another studio at 14 High Street.

On his move to Aldershot in 1877, William also took on a pub – the Aldershot Arms (later named ‘The New Victory’).

The ‘New Victory’ photographed in 1997

By permission of the Aldershot Historical & Archaeological Society http://ahasuk.com/gallery.php

According to trade directories, William Heathman closed his photographic studio sometime in or after 1880 and is listed in the 1881 census as a publican at the Aldershot Arms, 7 High Street, Aldershot. He is shown as a widower.

On the 24th January 1884, according to The Pall Mall Gazette, William owned arcade shops in the High Street and Union Street Aldershot but these were burned out early that morning.

William’s son, Henry Rowland Heathman tragically died of TB, a common killer of the time, on the 11 Hune 1889 at the age of only 24. He died at St. Thomas Hospital, Lambeth. Henry was a watchmaker and his address, on his death, was the same as William’s in the 1881 census.

In the census of 1891 William is at 33 High Street, Aldershot, Hampshire and is living on his own means with Kate Grover and Nelly and Vernon.

One week after Marth’s death, on the 9th September 1891, at the age of 56, William married Kate Grover at the Holy Trinity Church, Aldershot and was living at 33 High Street. He was described as a jeweller. William and Kate went on to have three daughters, Maud Ethel Heathman (1891), May Mary Heathman (1894) and Lady Lily Heathman (1896). 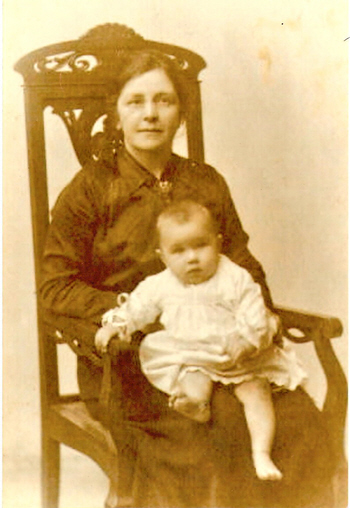 About the same time, according to a report in the Liverpool Mercury of the 10th September 1891, William appeared before the Croydon County Court for receiving stolen goods. He was shown as a boot maker in business in Aldershot. Evidently, on the 6th September 1889 Messrs. Bradbury & Co Limited of High Holborn, London sold to a Mr. Dunn a sewing machine valued at five guineas. Dunn then sold the machine illegally to William Heathman at Messrs. Aldridge’s Auction Rooms in South Norwood. Dunn was later caught and sentenced to a month’s prison with hard labour. William Heathman was ordered by the court to return the sewing machine to the defendants, thereby losing a considerable amount of money. See the report below. 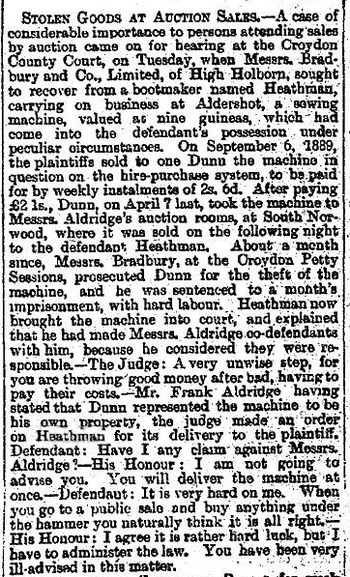 Report in the Liverpool Mercury of the 10th September 1891 re: stolen goods

William and Kate moved back to London by 1901 where they were living with their three daughters as well as with Nelly and Vernon, William’s children from his liaison with Mary Ann Green. William was the publican of the White Hart pub, 89 High Street, Whitechapel, London E and remained so until 1903.

Interestingly, the ‘White Hart’ in Whitechapel is still in existence and is well known for its link to Jack the Ripper. Apparently established in 1721 the ‘White Hart’ is situated on the north side of Whitechapel High Street by the covered entrance to Gunthorpe Street. In 1890, the main Ripper suspect Severin Klosowski (aka George Chapman) was working as a barber in the cellar of the pub, firstly as an assistant and later as the proprietor. He was hanged for the murder of two of his wives in 1903. The pub is also close to the murder site of Martha Tabram one of the Ripper’s victims. It would appear that William Heathman ran the pub just after these events !

It is also believed that William was a Freemason but this has yet to be proved.

William Heathman died on 11th February 1905 in Poplar, London from pneumonia and cardiac failure. His death was registered by his son Vernon and his address given as 87 Bow Road, East London and his occupation as ‘master builder’ – which seems rather unlikely. William’s will, which appears to have been made just one day before he died, did not name an executor and Letters of Administration were granted to Kate Heathman (widow of the relict) who was the residuary legatee for life. William left £3,909. 4. 10 gross and £3,782. 9. 2 net – a lot of money at the time.

William’s will read as follows

“THIS IS THE LAST WILL AND TESTAMENT of me WILLIAM HEATHMAN. I give and bequeath all my property and effects whatsoever and wheresoever unto my wife Kate Heathman for her life. She must pay all debts and expenses, rates, taxes, ground rents and keep property in repair, collect all rents aand moneys due and pay same into Bank. At her decease all to be sold and equally divided between my three daughters viz. Maud Ethel, May Mary and Lady Lilly. My wife Kate to have £100 out of the estate for immediate expenses my three daughters also Maud Ethel £10, May Mary £5 and Lady Lilly £5, for immediate expenses. My domestic servant Ellen Hampton to have £15, for expenses. My illegitimate son and daughter Vernon and Nelly to have £150 each out of the estate viz; – £50 each on attaining the ages of 25 years and the balance of £100 each when 30 years of age, also £5 each for immediate expenses. My other children by my first wife not to be entitled to anything.

IN WITNESS whereof I have hereunto set my hand  this tenth day of February one thousand nineteen hundred and five. I appoint Mr Daniel Tidman as one of my Trustees.

Signed by the said WILLIAM HEATHMAN the testator in our presence and at the same time as witnesses – DANIEL TIDMAN,   X MARY ANN BROUGHTON her mark.

An affidavit of due execution was filed on the 17th day of April 1905. Administration (with will) was granted to Kate Heathman the Residuary Legatee.

Clearly William had lived a very interesting life with 4 ‘wives’, 14 children and a variety of occupations!

Below are examples of William’s photography.