George Henry Glasson came to professional photography rather late in life. He started life as a carpenter and later was an insurance man.

He is first mentioned as a photographer in the 1901 census and was living at 123 Great Western Street, Moss Side, Manchester. He had a studio in Hulme, Manchester which was advertised from 1902 until 1914 (the year after he died).

He also advertised himself as a photographer working from 123 Great Western Street in 1911 (this was his home address in 1901 and probably remained so until late 1910 or early 1911). Whether this was a commercial studio or not is not known.

1901 – age c45, at 123 Great Western Street, Moss Side, Manchester with his wife Sarah and daughter Helena Elizabeth (occupation – photographer on own account)

By 1861, at the age of six, he was living with his mother and three siblings at 2 Park Row, Stoke, Devonport. George had an older sister, Helena Glasson (Junior) aged 6, and two younger brothers, William H Glasson aged 3 and James R Glasson aged 1. His mother is shown as the wife of a Chief Engineer R. N. which accounts for the fact that George and the rest of his family moved around the country more than most people.

By the 1871 census, when George was 15, he was living in Scotland with his mother and siblings at 14 Carmichael Street, Lanarkshire and he was an apprentice carpenter.

By the time of the 1881 census, George’s mother and siblings were living in Liverpool but George is not listed and may well have been elsewhere, either permanently of temporarily.

Sometime prior to 1882 George met Sarah Keatinge who, in 1881, had been living at 3 Selborne Terrace, in Manningham, Bradford where she was working as a cook. Sarah was the daughter of William Nathaniel Keatinge and Elizabeth Keatinge (nee  Hawkshaw) of Clonmel, Tipperary in Ireland and had been born on the 16 January 1855 in Clonmel so she would have been about 26 or 27 years of age when they met.

On Christmas Day in 1882 they were married at St. Paul’s Church, Walton on the Hill, Kirkdale, Liverpool, Lancashire – a witness to the marriage was Courtney Hope Glasson, George’s younger brother.

Eventually in 1894, George and Sarah had another daughter, Helena Elizabeth Glasson who was born in the June Quarter of1894 in Chorlton, Lancashire. Helena was baptised on the 6th May 1894 at St. Saviour’s Church, Chorlton-upon-Medlock – a suburb of Manchester to the south of the city centre.

In the 1891 census, George and his family were living at 115 West High Street, Salford, an area to the west of Manchester. George’s occupation is listed as a collector for the Prudential Assurance Company so, as yet, he had not taken up photography professionally. Also at that address was Elizabeth Keatinge, Sarah’s mother from Ireland, and his nephew Henry Keatinge. Henry’s father was William Keatinge, Sarah’s brother, who had died in 1883. It is not known if they were living with George or if they were merely visiting at the time of the census.

The first time that George Henry Glasson was mentioned as a photographer was in the 1901 census. He was living at 123 Great Western Street, Moss Side, Manchester with his wife Sarah and his daughter Helena. However, it was not until 1911 (and only 1911) that he advertised in trade directories as a photographer at this particular address. 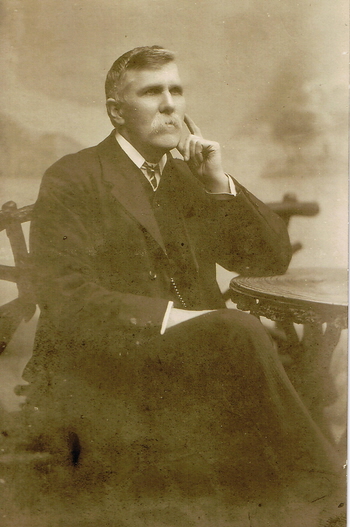 George’s main studio was at 52a Bristol Street, Hulme, Manchester which was advertised from 1902 to 1914. The 1914 entry would have been after George’s death but this would be explained as entries in trade directories often had to be booked many months prior to publication.

In the 1911 census George was still living at 143 Radnor Street, Hulme, Manchester with his wife Sarah and their daughter Helena Elizabeth who was 17 years old at the time.

George Henry Glasson died on the 8th July 1913 at the relatively young age of 58. He died at Chorlton, Manchester. It is not known where he is buried. 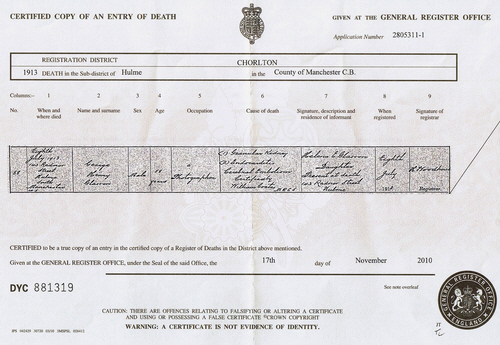 At present we do not have any examples of George Henry Glasson’s photography. If you can help, please Contact Us.