William worked as a photographer from two different studio addresses in Bradford from the mid 1850s until the early 1860s.

William Chatterton was born about 1825 in Wakefield in Yorkshire and was baptised on the 3rd of April 1825 at Woodkirk, near Castleford in Yorkshire.

On the 15th of May 1843 William married Hannah Bailey at the Parish Church in Bradford. 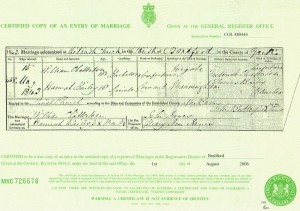 William and Hannah had only one child, a son called Henry Chatterton (the great great grandfather of Leanne Roddison – family historian). Henry was born on the 29th March 1845 at Manchester Road, Horton in Bradford, Yorkshire and was christened in the same year on the 27th April, also in Bradford.

By the time of the 1851 census William, aged 26, was a confectioner listed at 13 Industrious Row, Bradford (maybe this was his place of work) but his son Henry was recorded as being with his paternal grandparents, Frederick and Hannah Chatterton.

By 1856 William is listed in Lund’s Bradford Directory as a photographic artist back at 38A Ivegate, Bradford.

The 1861 census still shows William as a confectioner but this time at 1 Millergate, Bradford (Millergate is very close to Ivegate although nowadays it does not appear to be directly joined – Millergate runs into Aldermanbury which runs into Ivegate). However, his son Henry is recorded as a 16 year old apprentice stone mason living at Leeds Road, Soothill. Head of the household was Sarah Briggs, mother in law to Hannah Chatterton (Henry’s aunt). Also there at that time was Hannah Briggs, formerly Chatterton, and her husband David Briggs, Sarah’s daughter Hannah Briggs and grandson Harry Haveyard.

In 1863, William shows up again in trade directories as a photographer at 2 Millergate, Top of Ivegate, Bradford (did he, by this time, have two businesses with premises next door to each other?). William does not appear to have advertised as a photographer at any time after 1863.

Hannah Chatterton died on the 8th December 1865 at 3 Millergate at the age of 40. William was present at her death and informed the registrar that same day. On her death certificate her occupation was stated as ‘Wife of William Chatterton a Confectioner (Journeyman)’. Her cause of death was Disease of Heart Haematemesis.

Unfortunately, just 4 years later, William died on the 15th of April 1869 of a disease of the kidneys; also at the young age of 44.

He died at 4 Millergate, Bradford, Yorkshire, England – yet another Millergate address! 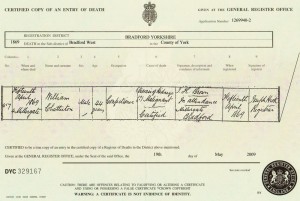 Baptized – on 3rd of April 1825 at Woodkirk, near Castleford in Yorkshire

Married – 15 May 1843 in Bradford, Yorkshire to Hannah Bailey daughter of Thomas Bailey (her mother was possibly Ann Dodsworth but this is not yet confirmed). Hannah was born in 1825 in Knaresborough, Yorkshire and at time of her marriage she was a servant in Manningham, Bradford. Hannah Chatterton died on the 8th December 1865.

We do not have any examples of William’s photographs at present. Can you help?