William left the employ of the London Stereoscopic Company c1864. Sometime between 1864 and 1871 he started his own business from his home at 7 St James’s Square, Kensington, London.

William England was born near Trowbridge, Wiltshire in 1830, the second child and oldest son of John England and Jane England (nee Mizen).

After Queen Victoria ascended the throne in 1837 things gradually began to change and the age of Empire began, with railways being built and people becoming more mobile. Even so, Britain was having economic difficulties in the early 1840s.

William Henry Fox Talbot, one of the inventors of photography in 1839, lived and worked nearby at Laycock Abbey. He was probably well known to local people in his capacity as landlord, astronomer, chemist and mathematician. He would have had some influence on William England’s early interest in fixing, developing and printing images, since Fox Talbot’s local associates were active in promoting his achievements. Photography, therefore, was in its infant stages when William was growing up.

Prior to 1842, before he became a teenager, William began work as a photographic assistant in a daguerreotype studio, learning the art of portraiture as well as the chemical process of treating the light-sensitive silver-coated metal plates to produce an image for sale.

One daguerreotype portrait cost a little more than the average weekly wage, somewhere between 15s and 25s depending on location. This cumbersome technique fell from fashion in the late 1850s as glass plate and wet collodion printing was invented thereby making it possible to produce several copies of one picture; not possible with daguerreotype.

Stereoscopic photography had been developed and in 1854 the London Stereoscopic Company came into being. Queen Victoria and Prince Albert attended the Royal Exhibition at the Crystal Palace in 1851 where Victoria was presented with a stereoscope. She experienced this fascinating new medium and it captivated her. Thus began a huge trade in stereoscopy and it has been calculated that by the mid 1850s a million homes owned a stereoscopic viewer. This was to have a significant influence on William’s life.

Some time before 1850, William moved to London to further his chosen career in photography. He met Rosalie Vernier, the French-born daughter of surgeon Louis Vernier, and they married in November 1850 in Paddington, London.

William and Rosalie had a son, Louis, and a daughter, Marie, and another child was due when William joined the London Stereoscopic Company in 1854. Walter John, the third child, was born in August 1854.

William soon proved to be the London Stereoscopic Company’s most talented photographer with his many views that were taken around England, Ireland, France and Switzerland. The demand for stereoscope pictures could barely be met, with thousands being produced by the mid 1850s. 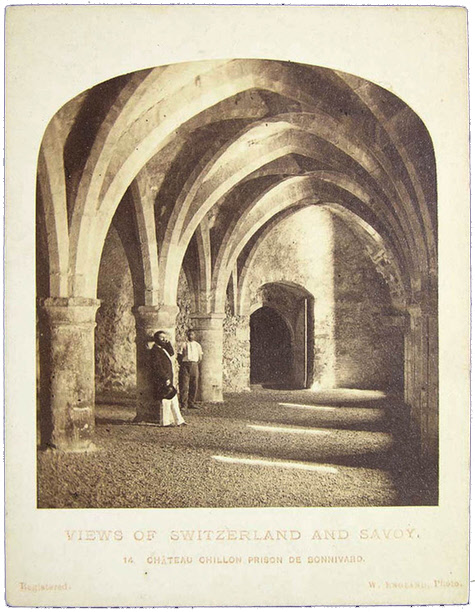 In 1855 William and Rosalie had another son, William Frank and their fortunes and social status increased as William gained a reputation for his precise and innovative work.

William was commissioned to travel to America in 1859 and again in 1860 to take a series of photographs of the country that so many had heard about but few had seen in pictures. He travelled to the USA for the first time and captured the first American views to be published abroad commercially. Using a revolutionary shutter which improved the camera’s depth of focus his atmospheric compositions show the stations and locomotives of the Great Western Railway, bridges under construction, river and lake scenes in New York, Montreal and Quebec and above all, the people participating in his scenes. Perhaps his most famous picture was of Blondin traversing the gorge below Niagara Falls on a tightrope 335m long and 50m above the water, pole in hands. It became the best-selling stereograph of all time; more than 100,000 cards were sold worldwide. Again in 1860 he went to America to find different perspectives in different seasons and produced wonderful winter scenes of snow and icy landscapes, always with people to give definition.

In 1861 William and Rosalie had yet another son, John Desire who was born in Nottinghill, London.

Over the following years William became well-known as he travelled the continent in summer each year, bringing back new additions to his series of photographs. In 1862 he invented the focal plane shutter, which greatly improved image clarity, which in turn revolutionized the popularity of stereograph.

In the same year he attended the London International Exhibition as official photographer for the London Stereoscopic Company but this time Queen Victoria did not attend, being in deep depression after the death of her beloved Albert.

In 1863 he toured the Alps under the auspices of the Alpine Club to capture many breathtaking and atmospheric scenes of glaciers, snowfields and frozen waterfalls.

He left the London Stereoscopic Company to start his own photography and printing business about this time but continued to travel and produce thousands of photographs, often being reviewed in the Art Journal, the Photogram and the British Photographic Journal.

Sometime in the 1860s William England and his family moved to 7 St. James’s Square, Kensington where they stayed until after William’s death in 1896 and in 1871 the census shows William, aged 41, as a photographer employing one boy and two girls.

In 1873 Rosalie became ill with heart disease when she was only 42 years old and she died suddenly.

A year later William married Eliza Hagar Read Riches who remained his partner for the rest of his life.

In 1880 the Photographic News (9TH April edition pages 171-173) interviewed William at his photographic studio in St. James’s Square and described him as ‘probably the largest Continental publisher of European views’ and ‘one of the finest landscape photographers’. They went on to say that ‘Mr. England is a man of resource. At St. James’s Square he prepares his own plates, makes his own varnish, albumenizes his papers, prints and mounts his pictures and does what lithographic or letter-press work the mounts require’. There is a delightful description and a sketch of his travelling camera and shade and an insight into his innovation with the disclosure that the tripod used for 11 years during his travels on the continent was made of bamboo and exceedingly light. 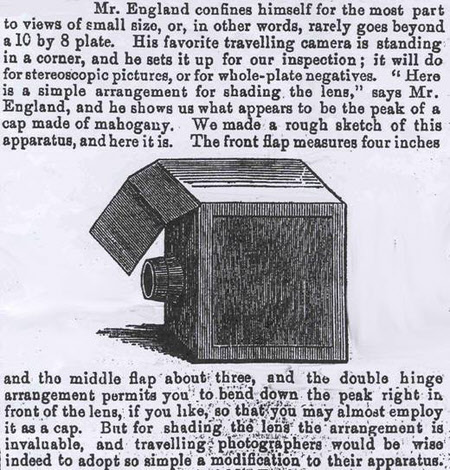 William’s interests were not confined to photography because in 1878 and 1889 he was on the board of jurors at the International Exhibition in Paris, being foreman of the British section in 1889 and received an ‘Officier de l’Academie’ award. Then in 1893 he took out British patent 2282 for an electric toy!

William died at his home in 7 St. James Square, Nottinghill, Kensington, London on the 13th August 1896. Probate was granted on the 14th January 1897 to William Mayland, gentleman, and Louis William England, photographic printer. His effects totalled £1,138 17s 5d. and he was described as a photographic dry plate manufacturer.

William England left behind a legacy of thousands of glass plate negatives of exquisite images taken in many countries of Europe. They are now in the Hulton Getty collection.

William’s siblings were also involved in the photographic business.

In 1861 his brother John was a photographic mount manufacturer employing 10 men and 2 boys in Tottenham Court, Pancras, while sisters Sarah and Jane were in partnership as photo mounters employing two girls, at the same address. Jane’s husband Richard Stanley Freeman was listed as a photographer in Notting Hill.

William’s children, it seems, had had fostered in them an interest in art and photography as they grew old enough because three of his sons became involved in various ways. Louis and Walter joined their father in a combined photography, printing and manufacturing business at 27 Charles Street, Royal Crescent, Notting Hill (Louis William advertised as being at that address in trade directories in 1900) and John branched out eventually to begin a photochemical manufacturing venture.

John and William Frank married sisters Ellen and Phillis Pearman, the daughters of yet another London photographer, Thomas L Pearman.

William Frank was the only son to have resisted the photography bug and decided instead to investigate other parts of the world. In his early 1920s William Frank and his young wife emigrated to New Zealand, where they became pioneers, teaching the natives in the northern wilderness of the North Island, and both living to a grand age serving the communities they grew to love. One son, Frank William, died serving New Zealand during World War 1.

William’s grandson William Frances, son of Walter John, migrated to Australia with his wife and son John William in 1951. John William now resides in Geelong with his family.

A History of Photography – Robert Leggat

An American Journey The photography of William England – Ian Jeffrey 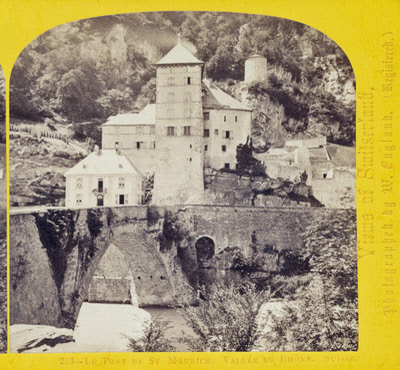 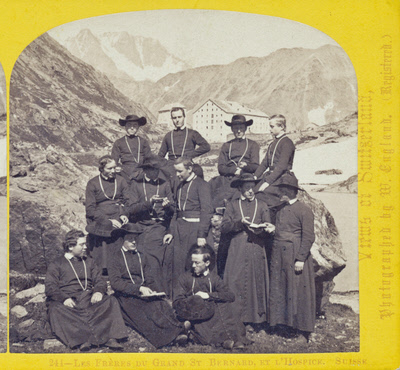 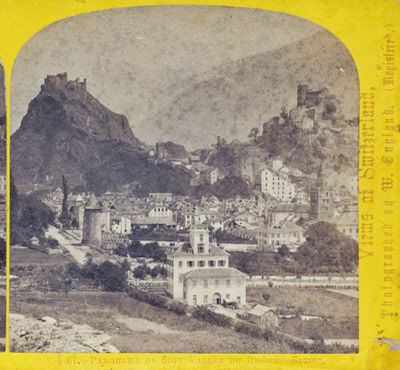 One half of a stereo view by William England. Panorama de Sion, Vallee du Rhone, Switzerland