Dingwell was an artist and appears to have come to photography rather late in life.

He first advertised himself as a photographer in 1905 when he would have been 46 years of age. His studio was at 28 Crow Tree Road in Sunderland, Co. Durham. He continued to advertise at that address until 1910.

In 1861 he was living at 10 Derwent Street, Bishopwearmouth with his father, a ship carver (journeyman), his mother and his older brother Oliver who was 5 years old. Another family was also living at the same address.

In 1871, at the age of 11, Dingwell was living at 28 Crow Tree Road, Bishopwearmouth with his father, a carver and gilder, his mother Frances (listed as Fanny) and his older brother Oliver and his younger brother George who was 8. Also listed in the household were his grandparents George and Mary Tate.

In 1877, when Dingwell was 18 years old he spent six months in prison for having housebreaking tools in his possession at night.

By 1879, on the 15 September, Dingwell had married Mary Frances Hanley who had been born on the 10th October 1860. Mary’s father was James Patrick Hanley who was deceased at that time and Mary’s mother was Hannah Hanley.

In 1880, Theresa Frances Tate was born at 6 Eden Street West, Bishopwearmouth and was joined by Dingwell Bailey Tate (later also a photographer) in 1882 and by James Osman Tate in 1884.

In 1881 Dingwell, married and aged 21, was head of household at 6 Eden Street West, Bishopwearmouth living with his wife Mary Frances and their infant daughter. His occupation was recorded as a carver and gilder. Also in the house were his widowed mother in law Hannah Hanley (also listed as head of household) and a visitor – Hannah Newby.

Between December 1884 and April 1887, the family moved to 68 Northumberland Street, Sunderland where John Tertius Tate was born on the 9th April.

By 21 July 1889 the family had moved again to 15 Green Terrace, Sunderland where Mary Hannah Newby Tate was born. Interestingly, Mary went on to marry a William Edward Hodgson and had 10 children including two of the same name (Ivy Winifred). The first one was born on the 10th December 1920 and died the same year. The second one was born a year later on the 7th December 1921.

In 1891, aged 32, Dingwell Burn Tate was at 15 Green Terrace West, Bishopwearmouth living with his wife and five children. He was listed as an artist and sculptor.

On the 20th September 1895 Joseph Tate, their last child, was born at 7 Collingwood Street, Sunderland. Sadly, he died in October 1895 when he was three weeks old.

In 1901, aged 42, Dingwell was at 37 Vale Street, Sunderland living with his wife and five children. He described himself as an artist and a photographer.

Interestingly, Dingwell sometimes employed a rather novel technique when painting. He would take a monochrome photograph, enlarge it and then set about colouring it and populating it with groups of little people. Most of his figures had their backs to the viewer, making it difficult to detect that they had been over-painted. Below is one of many paintings he did of Bishopwearmouth and one can clearly see his unusual technique. 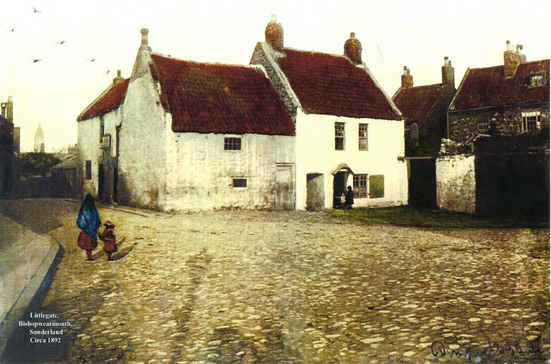 A painting of Bishopwearmouth by Dingwell Burn Tate

Dingwell first advertised himself as a photographer in 1905. His studio was at 28 Crow Tree Road in Sunderland, Co. Durham. He continued to advertise at that address until 1910. Of course the studio may have been open before or after those dates and was not advertised. There is no record of any other photographer having had a studio at that same address either before or after that period. 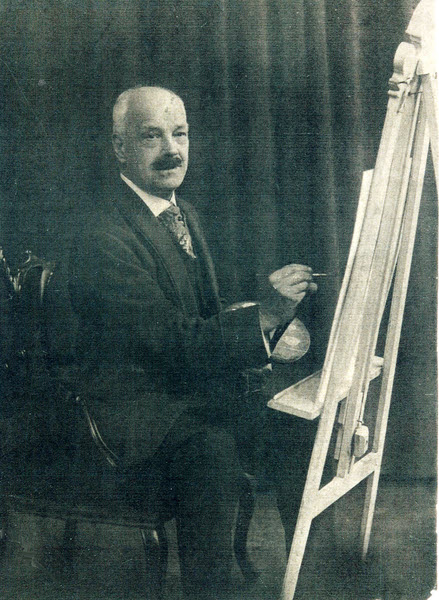 Dingwell and his wife Mary Frances Tate in June 1929 at the wedding of her grand daughter Ivy – see below: 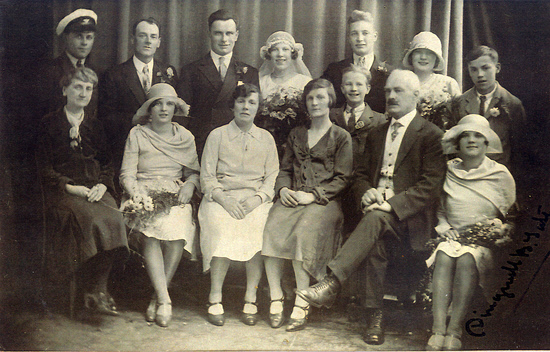 Prior to his death, Dingwell lived at 16 Foyle Street, Sunderland where he had his artist’s studio. It is not known if he used that address as a photographic studio as well.

His obituary in the local newspaper stated:-

Mr. D B Tate, a Sunderland artist and photographer, has died at 16 Foyle Street [Sunderland]. Mr. Tate was a frequent exhibitor of watercolour paintings at North Country exhibitions. One of his best known works was a portrait of a well known character of years ago, Dickie (Richard) Chilton. The painting was purchased by an admirer of Mr. Tate’s art and presented to Sunderland Art Gallery. Mr. Tate had the honour of being appointed to photograph King Edward V11 during one of the King’s visits to Lambton Castle as the guest of the late Earl of Durham.

Despite his undoubted abilities, Dingwell Burn Tate died a relatively poor man. His work however has been left to an appreciative audience and many pieces still exist in the Sunderland library.

Dingwell’s son, Dingwell Bailey Tate was also a photographer and advertised his studio at 13 West Cleft Road, Sunderland from 1921 to 1934.

At present we do not have any examples of Dingwall’s photography. If you are able to help in this respect, please Contact Us.