Robert William Simmons worked as a photographer and the earliest known example of his photography was taken in 1885 at the studio at 2 Nuns Island, Galway.

Later he had several studios in Galway and one in nearby Ballinasloe.

He was listed in the census as a photographer in Galway in 1911 and he was still recorded as a Galway resident in 1939, the year of his death.

1911 – age 50, at 2 Devon Place, Galway with wife Jean (recorded as Jeannie) and one child, a niece and 3 boarders. Occupation photographer

Robert William Simmons was born on the 5th December 1860 at Carlow in County Carlow, Eire and was the first son of Robert Simmons and Catherine Gulifoye. His father was a Clerk of Income Tax and an accountant and it is thought that his grandfather was a sea captain.

Robert was baptised at the Scots Church, Carlow on the 30th June 1861.

Little in known of Robert in the 1860s and the 1870s although he had a brother called George Valentine Simmons who also became a photographer.

In 1884 Robert married Jean Holland who was born in Dundee in Scotland in 1860. She was one of the six daughters of Hugh Murray Holland who had moved from Dundee to Galway as a motor engineer (not cars!).

Robert and Jean had six children but sadly only one, Albert Hector Simmons, reached adulthood.

The earliest carte de visite by Robert which has been found so far was taken in 1885 at his first studio at 2 Nuns Island, Galway.

Robert’s interest in photography was evidently shared by his brother George Valentine Simmons (see below) and the Kew National Archives hold copyright photographs taken by both Robert and George.

In 1901, at the age of 40, Robert was living at Lower Dominick Street, Galway, County Galway, Eire with his wife Jean and their two children. His occupation was listed in the census as a photographer. Robert is known to have had a studio at 26 Dominick Street (according to photographs in the Kew National Archives).

By 1911, then 50, Robert William Simmons was living at 2 Devon Place, Galway with his wife Jean (recorded as Jeannie) and with Albert Hector Simmons their one surviving child. Their daughter, Eleanor Andrews Simmons, who was born in 1890 and, in 1901 was registered as blind, had not survived. Also in the house was a niece and 3 boarders. Robert’s occupation was listed as a photographer.

Robert Simmons was regarded as Galway’s most fashionable photographer and by repute the favourite photographer to the Duke of Connaught. He also photographed Nora Barnacle, later the wife of James Joyce, and there is mention of him and the photograph in Brenda Maddox’s biography of Nora Barnacle called simply ‘Nora’ (first published 1988 by Hamish Hamilton and later re-published 1996 by Reed International).

Seemingly, according to Brenda Maddox’s account, Robert justified his high prices with the slogan ‘A bad photograph is dear at any price’. His pride in his photographs was also heavily reflected in his advertising.

Robert moved studios a number of times in Galway including opening at 6 William Street, Galway. His advertisement in the Connacht Tribune dated the 27th December 1913 is shown below: 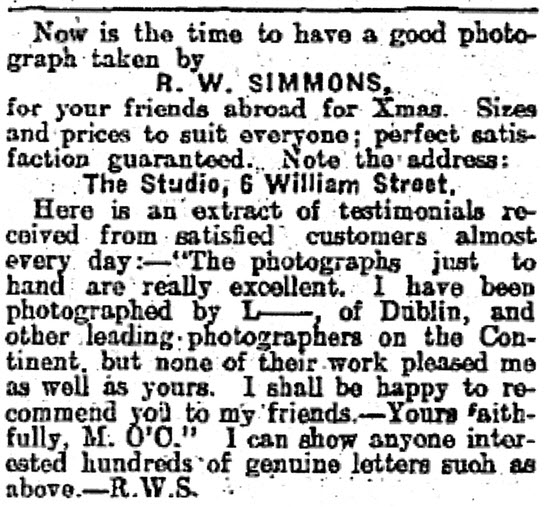 Robert William Simmons’ advert in the Connacht Tribune in December 1913

At some point prior to 1914, Robert William Simmons had successfully opened a ‘motor business’ and his only surviving son, Albert Hector Simmons, worked in the business. Albert was a competent and inventive engineer. The business became the main agency for the Ford Motor Company in Galway.

Albert married Miss Jeannie Hare on the 2nd of April 1914. The report in the local paper is interesting to read – see below: 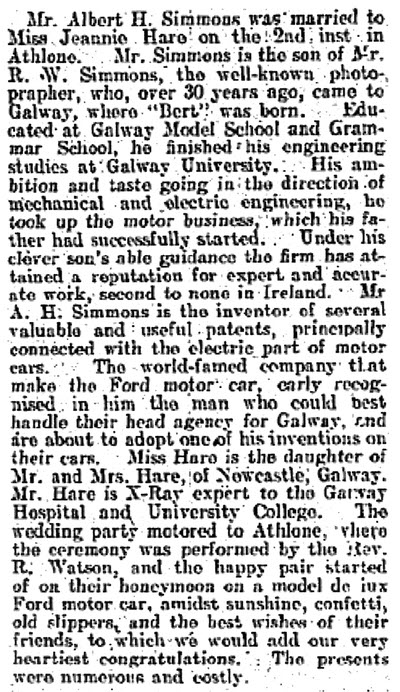 Robert took over the business when Albert went to serve in WW1. However, the business declined to such a degree that it was eventually sold after the war for £100.

Robert also had interesting family connections. One of his nephews became Sir Frederick Simmons, Lord Mayor of Derry and through this connection he was also related to James Stewart Simmons the Irish Poet.

Another interesting family connection was his nephew Major Vincent Wheeler-Holohan who was an historian, a King’s Messenger and a heraldry expert.

Robert died in Dublin in 1939 although he was still listed as a Galway resident at Lower Salthil at that time.

George Valentine Simmons. Robert’s interest in photography was shared by his brother, George Valentine Simmons, who had his own studios at Portadown, Ireland. The Kew National Archives in London hold copyright photographs by him. The earliest from 1895 are photographs of the Independent Order of Foresters and entitled ‘High Court of Ireland and Delegates’ and ‘Supreme Court of Ireland and Delegates’. George’s address at registration is given as Portadown.

In the 1901 census he was living at 1 Frederick St, Clara, King’s Co. and in 1911 at 3 Frederick Street. His occupation is given as station master. He was a station master most of his life having been in that post in the town of Kildare in 1881 (Slater’s directory). 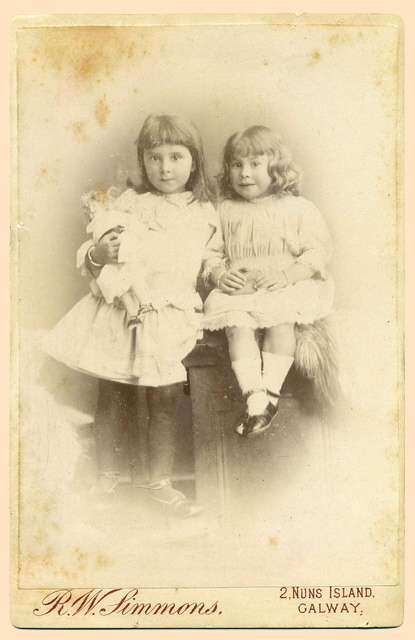 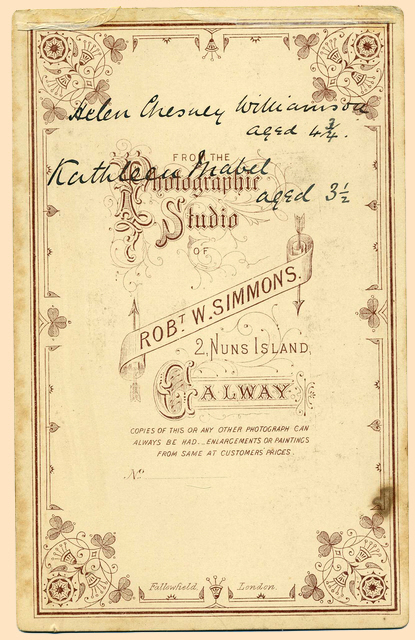 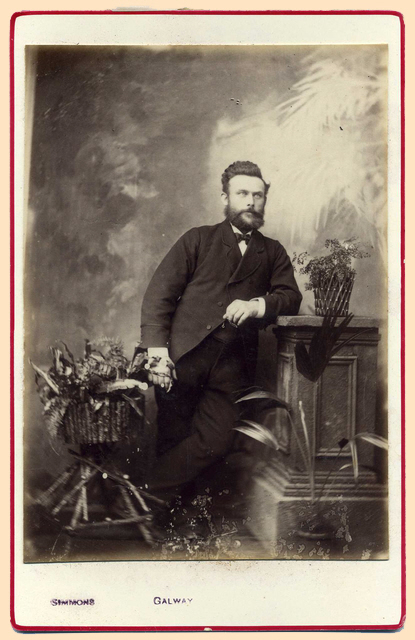 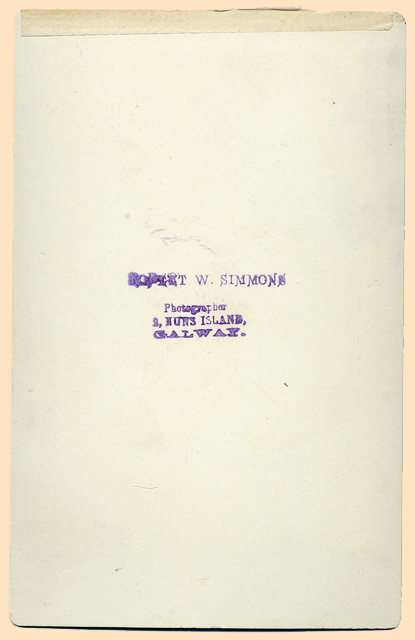 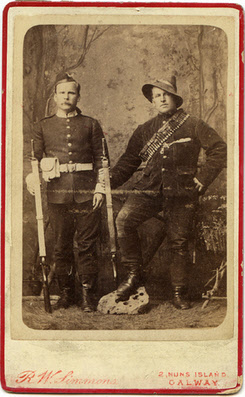 For more information about this interesting picture go to
http://www.soldiersofthequeen.com/page3-UnidentifiedPrivateandColonialVonunteer.html 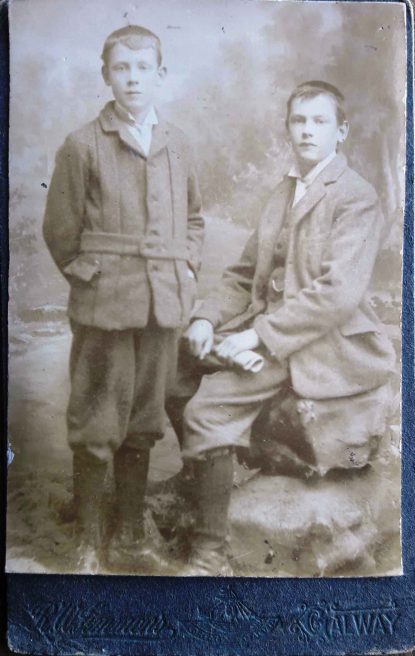