Photography Business
Established as travelling photographers about 1861. By 1891, the photographic business was replaced by a showman’s business. The photography business operated around Shropshire and the Welsh borders.

Both brothers, Christian Jews, were born in eastern Europe; at various times their birth place was described as Poland, Prussia or Germany. In the early years of the 19th century Poland had been partitioned between Russia, Prussia and Austria, and following the French Revolution there was a failed Polish insurrection. The following years saw terrible persecution of the Poles with many thousands being exiled to Siberia and thousands more fleeing to the west. No doubt the relatively quiet Shropshire town of Ironbridge was a welcome refuge from their troubled homeland.

The two brothers, Aaron and Jacob Gotthiemer, were travelling photographers with Shropshire connections. In some records, including on all of their cartes de visite mounts so far seen, their name is spelt Gottheimer.

Although there is a big age difference between them, Aaron described Jacob as his brother in a letter to a newspaper in 1872 about the toll incident. They are also described as brothers in the census records.

Aaron, had been in business in Ironbridge since at least 1850, initially as a clothier and, in April 1861, he was also a licensed lodging house keeper in Waterloo Street and married to Ann. Jacob lived with them and was a brickyard labourer.

Before the end of 1861 Aaron had plans for a travelling photographer‘s studio. A dispute in September, over the cost of making a dark box and a tent for photographic purposes, was settled in Gotthiemer’s favour by the County Court at Madeley. The tent frame was to be ten feet by twenty feet with two ends; presumably the ends were solid and only the sides and roof were to be canvas. The cost agreed was £2:10:0 but the dispute arose over whether the dark box was to be included in that cost.

Aaron was the proprietor of the Crown Inn, Waterloo Street in 1868 when one of his lodgers, Bernard Zusman, a travelling jewellery salesman, was the victim in the notorious Stirchley murder mystery. Two men, George Harris and Richard Hart were apprehended but only Harris was prosecuted. After a trial lasting three days, Harris was acquitted leaving the mystery unsolved.

By April 1871 Aaron had given up the Crown Inn and both brothers and their wives were ‘on the road’ in their separate caravans along with their mobile studio set up in the market place in Llanfair Caereinion, Wales. By this time Jacob had married his wife Sarah. who was 4 years his junior.

An interesting aside which shows how the Gotthiemer brothers were perceived by some, the Wellington Journal correspondent wrote in his 1871 report of the St. George’s Races – “Our friend Gotthiemer, in spite of the ‘vet veather’, did not do amiss at his photographic studio”.

Another disagreement in 1872 reveals that Jacob was returning to Ironbridge with three caravans pulled by three horses. The toll for crossing the bridge was one shilling and sixpence but because the road had been newly repaired the first of the vans became stuck and, when Jacob tried to use a second horse to assist, the gate keeper demanded a further toll. Jacob refused to pay and was summoned for obstruction. He was fined one shilling plus costs.

It might be that Aaron was only an occasional traveller. Certainly by 1877, he was again trading in Ironbridge as a clothier and two years later as a tobacconist and general dealer in the High Street.

Jacob continued to travel; his caravan and photographic studio were to be found at the Lion Inn yard, Welshpool in April 1881.

Aaron, still a tobacconist in 1888, died at the age of 71 in December 1889 and was buried in a polished oak coffin at St. Luke’s Churchyard, Ironbridge, attended by a “large number of sorrowing friends”. The ceremony and service of the Foresters was performed by the Rev. G. Wintour.

The 1891 census found Jacob in Oakengates as a showman. The photographic tent had gone; bring on the steam hobby horses. His roundabout was at the Llangollen Smithfield in April 1901.

Jacob was finally naturalised as a British subject on 15 June 1910 and he was living in Dawley at the time. He stated then that he was born in Germany.

His roundabout was at Church Stretton and Much Wenlock in May 1911.

According to extracts from The Wellington Journal and Shrewsbury News 1911 relating to Broseley and District, in June that year Jacob was charged at Madeley with having no light on his vehicle. These were the longest days of the year! Was he moving his van in the dead of night? No wonder he told police officer Plant ‘it was a pity he had nothing better to do’.

Just a month later, his steam engine was wrecked in an accident at Castle Foregate during a move from Shrewsbury to Oakengates. He re-equipped with Electric Jumping Horses which appeared at Shifnal in July 1912 but, within two years, 57 year old Jacob was selling his ‘roundabout and travelling van’.

Jacob’s wife, Sarah Ann, died on the 30th March 1927 and was buried at Holy Trinity Churchyard in Dawley, Shropshire. Her address was given as 18 Wrekin Road, Wellington, Shropshire as at the time of her death. 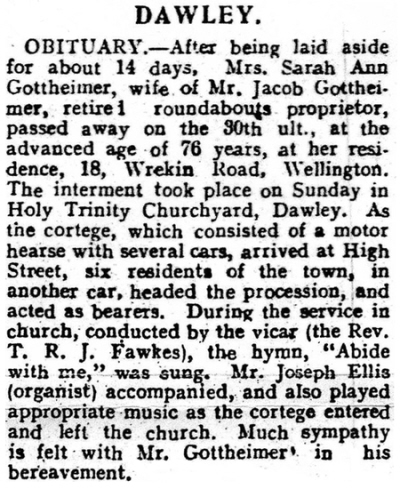 Jacob died and was also buried at Holy Trinity Church, Dawley in 1928 and, by request, there were no flowers.

Neither Jacob nor Aaron had children to carry on their family name. Their only memorials are their gravestones and the Primitive Methodist Chapel foundation stone which is now preserved in the stonemason‘s yard at Blists Hill Victorian Village.

Aaron had represented local tradesmen when laying the stone of the chapel on Madeley Road, Ironbridge. This may have been a result of the respect afforded to him by the tradesmen, but Fred Lloyd told oral historian, Ken Jones, that “there was a little bit of controversy about who should do it. Nobody really wanted to do it”. Fred supposed that “the trades people were belonging to other denominations”. There is no date on the stone but the Chapel was originally built in 1860 and rebuilt in 1883. The newspapers reported the ceremonial laying of three stones in 1883 but not by Gotthiemer, so perhaps his was laid in 1860. The chapel itself was demolished in the 1960s.