Aaron Vandyke began his photographic career in Liverpool in 1867 by joining with Richard Brown to form Vandyke & Brown. They used Brown’s studios at 34 Castle Street and 42 Virgil Street.

The Virgil Street studio was closed in 1868 and another studio opened at 31 Bold Street and by 1870 Vandyke & Brown opened a third studio at 87 Lord Street.

Aaron died in 1892 at the age of 49 but his studio at 62 Bold Street, Liverpool was still advertised in his name until 1902. It was almost certainly operated by his son, Sidney until he went off to the USA.

(Sarah Vandyke, age 40, is a recorded as a visitor staying with her sister Eugenie Marks, Eugenie’s husband George Marks (a gold jeweller) and their family in Islington, North London whilst Sidney M Vandyke, age 13, was staying with his uncle Morris L Cohen, a commercial traveller, and his family in Brighton, Sussex and with him is Sydney’s younger brother Percy Vandyke, aged 9)

Aaron Vandyke, according to the Oxford Dictionary of National Biography (Oxford University Press) was born into a Jewish family at Bunde, East Friesland, Hanover in Germany about 1843 and lived with his father, Salomon van Dyk (aka Dijk), who was Dutch and arrived in Bunde about 1836 and his mother, Sophia J van Dyk (aka Dijk), nee Ries, who was Portuguese and was born in Bunde in 1810. (Note – his father was recorded as Solomon Vandyke on his son’s marriage certificate in 1870). Both of Aaron’s parents died in Bunde in 1881 and 1889 respectively.

Aaron had a sister and three brothers including a younger brother, Carl Vandyke (aka Carl Vandyk), who was born in 1851. Aaron and Carl both emigrated to England and both become photographers.

An interesting insight into the lives of Jewish people in Germany in the 1800s can be found in “The Guide to the History of Jewish People in Lower Saxony”, volume 2 by Herbert Oberaus, David Baukier and Daniel Fraenkel – see below:-

In 1867, Aaron joined Richard Brown, about five years his senior, at Brown’s own studio at 34 Castle Street, Liverpool and started the firm of Vandyke & Brown. Richard Brown had operated studios at three other addresses in Liverpool prior to that since 1865 but ceased to operate in his sole name once the new partnership was formed. It is interesting that the firm was called Vandyke & Brown and not Brown & Vandyke – especially as Brown was senior by age and, apparently, experience.

Another studio at 42 Virgil Street, which had also belonged to Richard Brown, was operated in joint names and appears to have closed in 1868 as it was no longer listed on the back of Vandyke & Brown carte de visite mounts after their 31 Bold Street studio was launched in 1868.

In 1869 there appears to have been a serious spat between Aaron and Richard Brown (more details to follow).

By 1870 a further studio was opened at 87 Lord Street as was a printing works and equestrian studio at 4 South Hunter Street, Liverpool.

On November 23rd 1870, Aaron (Aron) married Sarah Frances Harris who was 10 years younger than him and had been born in Liverpool in 1851. Sarah was the daughter of Julius Harris (1817-1885) who was born in Poland, he was a watch manufacturer and later a jeweller. Her mother was Amelia who was born in Bedfordshire in 1830 and died quite young in 1874. Sarah had nine brothers and sisters, some of whom were born in Tasmania, Australia.

The 1871 census shows Aaron Vandyke, at the age of 30, living at 121 Falkner Street, Liverpool with his wife Sarah who is aged 20. No children are listed. Aaron’s occupation is recorded as an artist photographer and living with them was a 24 year old servant called Mary McMillan.

Aaron and Sarah’s first child was born in May 1872 in Liverpool and she was named Theodora May Vandyke. She was followed in 1873 by their first son, Isadore Saloman Vandyke.

In 1873 /1874, the Vandyke & Brown printing works and equestrian studio moved to 19a Hardman Street and remained there until at least 1875 when the partnership was dissolved on the 19th November 1875.

The notice in the London Gazette read as follows:-

Richard Brown immediately created the new firm of Brown, Barnes & Bell which became very prominent in the city of Liverpool as well as other locations in the north of England, Wales and London over the next 50 years; employing over 320 people by 1881.

Meanwhile, from 1877, Aaron Vandyke continued his business at 60 and 62 Bold Street, Liverpool. He took over the 60 Bold Street studio from a Henry Burrows.

Both firms identified themselves on their photographic mounts as ”Successors to Vandyke & Brown”.

From 1878, Aaron also advertised from 64a Bold Street and in 1881 from 39 Bold Street as well. He described his business as ‘miniature and portrait painters’.

Also living at the same address was Aaron’s sister-in-law, Ada Harris, who was unmarried and aged 19. The household also included two unmarried domestic servants, Hannah Green? aged 29 who was described as a cook and her sister (probably) Kate Green who was aged only 15 and was described as a housemaid.

In 1882 Aaron and Sarah had their youngest child and called him Percy Reginald Vandyke.

From 1886 Aaron no longer advertised from 64a Bold Street although his studio at 62 Bold Street was still advertised and obviously remained as his prime business premises.

According to the census, Aaron had become a naturalised British Subject by 1891.

In 1891 Aaron, at the age of 48, had moved to nearby 15 Canning Street, Liverpool with his family – he was described as a photographer. At that same address were his three older children and two servants. Neither his wife, Sarah, nor his son Sidney were recorded.

Further research reveals that Sarah Vandyke, age 40, was a visitor staying with her sister Eugenie Marks, Eugenie’s husband George Marks (a gold jeweller) and their family in Islington, North London.

At the same time, Sidney Vandyke, then aged 13, was a scholar and was staying with his uncle Morris L Cohen (Cohan?), a commercial traveller, and his auntie Rachael Cohan and their family at 2 Upper North Street in Brighton, Sussex. With Sydney was his younger brother Percy Vandyke, aged 9.

At some stage it appears that Aaron opened a studio in London or intended to as the carte de visite in the Gallery below shows. Further details of this studio have not been identified at this time.

The picture below shows Aaron (Aron) on the left playing chess with Herman on the right whilst brother Carl looks on. 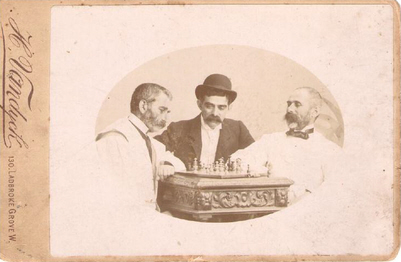 Interestingly his studio at 62 Bold Street continued to be advertised in his name in trade directories until at least 1902. It is probable that his son Sidney M Vandyke ran the business until he himself emigrated to the USA in 1901 (the year that the 1902 trade directory would have been compiled). Sidney emigrated to join his brother Isadore who had emigrated to the USA in 1899. The premises at 62 Bold Street were not used again as a photographic studio until the 1920s.

Sarah remained in Liverpool after Aaron’s death but by 1901, nine years later, at the age of 50, she was a patient in some sort of care home at The Brook Villa, West Derby Road, Liverpool. She died in West Derby, Liverpool in the first quarter of 1905.

Some of Aaron’s children travelled overseas. Isadore went to California, USA in 1899. Sidney was a photographer and went to the USA in 1901 with a 2nd class ticket, paid for by an uncle, in search of work and to visit his brother Isadore. Percy travelled from Liverpool to Quebec in 1905, also to visit Isadore. Both Sidney and Percy returned to England and died in Fulham in the 1950s.

Examples of Aaron’s photography are shown below. Firstly from the Vandyke & Brown studios and then followed by photographs from his own studios.

See the word ‘London’ printed on the front of the mount. No specific address in London is shown.