Business
Established in 1860. Josiah died in 1884.
Studios were operated in Shrewsbury, Shropshire and Rochdale, Lancashire

Josiah Groom was born in Hadleigh, Suffolk. In his teens he apprenticed to George Collen, a plumber and glazier in nearby Stowmarket. No photographic studios were operating in Stowmarket at that time. The town was visited by John Beattie in 1854 and F. Dowling set up a short lived studio in 1858 but by then Josiah had partnered with Harriet Poppelwell and was on the move. Their first child Josiah was born in 1856 in Mansfield, Nottinghamshire and their second Harriet many miles from there in Launceston, Cornwall. By the birth of their third child Frederick in 1859 they were in Shropshire where they were to remain for many years. Josiah’s brother David Groom had set up as a photographer in Plymouth. Josiah opened a business as a frame gilder with photography as a sideline. It is unclear where and how he learnt his trade. No doubt riding the wave of popularity surrounding the newly announced carte de visite photograph format, Josiah’s business blossomed and he went on to become one of Shrewsbury’s leading photographers.

Josiah’s wife Harriet after bearing 8 children, died in 1865 when they were living at Bynner Cottage, Belle Vue in Shrewsbury. Josiah remarried the following year to a local girl, Martha Evans. Martha bore another 5 children before her untimely death some 10 years later, then Josiah went on to marry Martha’s sister Mary who had yet another 5 children giving a grand total of 18 children! Of these the first born Josiah and David followed into their father’s profession. Josiah was said to have produced 40,000 negatives whilst in Shrewsbury. In the early 1880s Josiah moved to Hamer, Rochdale near Manchester continuing his trade in photography until his death at the premature aged of 45. His business was carried on by his son Josiah, and his son David worked as a photographer and picture framer in Burslem, Staffordshire. Sons James, Fred and Walter became butchers while Jesse became a baker. 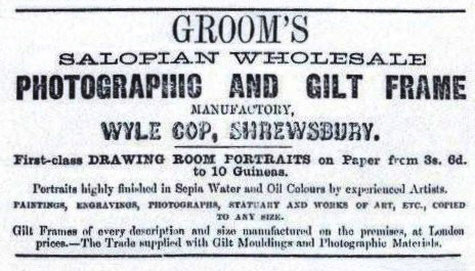 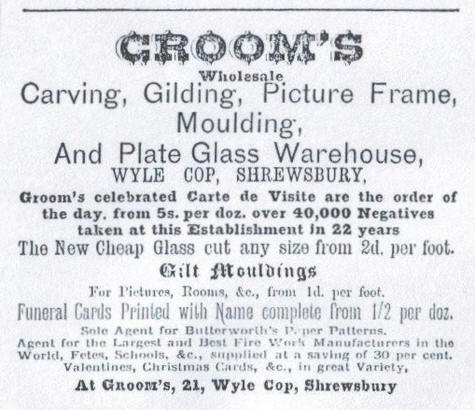 Data in italics is unconfirmed at present.

NOTE: If you have any further information or images that you would like to contribute, please Contact Us.