George came to photography relatively late in life having been, amongst other things, a sheep farmer and soldier in South Africa, a soldier in West Africa and Mauritius and a railway policeman in the UK.

By the mid 1880s he had a photographic studio in Sydenham and operated as a photographer until 1895. After leaving the studio he continued with his job with the Gas Company and eventually died in 1934.

George William Bathe was born at 27 Orchard Place, at the Woolwich end of Plumstead Road on 12 July 1847. He was baptised at St. Mary Magdalene, the parish church of Woolwich, on 7 November 1847.

He was the eldest child of William Bathe (1817-1896), then a police constable, and Mary Bathe (née Barber) (1824-1894). In the early 1850s, William was promoted to sergeant and transferred to Deptford where George attended school.

George was enrolled at St. John’s National School on 22 January 1855 – the fifth boy to join the school after it opened. As a young teenager, George Bathe was often getting into trouble and in February 1860, after five years at the St. John’s School, George was asked to leave because of his bad conduct.

George frequently ran away from home – in 1861, aged just 13, he went to sea on a collier and stayed for 5 months. He returned home, however, and went to work in a brass foundry where his father, who had been dismissed from the police, was warehouseman.

In October 1861, George ran away once more, having stolen his father’s wages for the week amounting to 21 shillings. This time, his parents decided to teach him a lesson and George was charged with defrauding the pay clerk at the foundry. He was sentenced at Maidstone Quarter Sessions to one month’s hard labour and four years in a reformatory – the Philanthropic Society’s Farm School for Boys, a 350-acre farm at Nutfield, near Redhill in Surrey.

George was described on his admission to the Farm School as being 4ft 10in in height, with a well made figure. His complexion was dark and he had dark brown hair. His eyes were said to be ‘large, hazel, staring’, his nose, small and he had prominent lips and large ears. He was said to read ‘pretty well’ and write and cypher ‘a little’. His general ability was summed up as ‘fair’. Besides his time at St John’s School, he had, apparently, also attended a school at Woolwich Old Church.

George did not keep out of trouble even at the Farm School – he was punished on several occasions for deceit and once for ‘ill-using a cat’.

The basic training for the boys at the Farm School was working on the land but such trades as tailoring, carpentry, shoemaking and blacksmithing were also taught. At the end of their time at the school many boys were offered the chance of a new life in various parts of the British Empire. Just after the end of his sentence, on 25 October 1865, George Bathe set sail for Natal, South Africa.

By August 1866, George was working for a sheep farmer, a Mr. Deas, at Winter Hoke, Umvoti District, Greytown, Natal. Initially he got on well. His letters home were, apparently, very upbeat: he was to get 12 shillings a week and all found and later he thought he would send for one of his younger brothers to join him. However, just before Christmas 1867, a friend heard from him and reported that he had left Mr. Deas as he had been badly treated and had moved to work at a tobacco plantation.

Obviously unhappy in that position as well, on 21 September 1868 aged 21, George Bathe enlisted at Fort Napier, Pietermaritzburg, Natal in the 2nd Battalion of the 20th Regiment of Foot – then known as the East Devonshire Regiment. He was with the 20th for just over four years – serving until 1870 in South Africa and then until the beginning of 1872 in Mauritius in the Indian Ocean.

The regiment returned to England for a short period, during which time he paid a visit to the Farm School, before being posted to Buttevant Barracks, County Cork, Ireland. George wrote from there in April 1872 saying that he wished to leave the army and become a railway policeman with the London & Brighton Railway Co. and that he was also contemplating marriage. George could not get a discharge at that time but that summer he did managed to get a secondment to the Army Service Corps in Woolwich, London and was formally transferred to the ASC on 1 November 1872.

While stationed at Woolwich, he started courting Evangeline Bradley (1854-1950), a young Deptford lady who, it appears, had been walking out with George’s younger brother, Henry.

On the 1st March 1873 he was promoted to Second Corporal, a rank equivalent to lance-corporal in other units. At the end of 1873, 3359 2nd Corporal Bathe G W was part of a small contingent of ASC soldiers who were sent to Cape Coast Castle, British Gold Coast, West Africa in support of the 1873/4 war against the Ashantee.

The Cape Coast Castle was built in the 1600s for the trade in timber and gold. Later the structure was used in the transatlantic slave trade. The Castle, or Castle and Dungeon to give it its official name, was later restored in the 1920s by the British Public Works Department.

Like all the servicemen who took part in that campaign, George Bathe was awarded the Ashantee Medal but, because he remained at the coastal base, he did not get the Coomassie clasp – in fact only 10 of the 57 ASC soldiers in the campaign were awarded the clasp for service north of the Prah river. 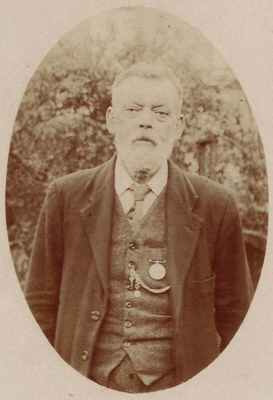 Upon his return to the UK, George Bathe was again stationed at Woolwich but it became clear that an injury he had picked up in West Africa was causing problems: he had been injured by a bullock’s horn and had a hernia which rendered him unfit for service.

A regimental board gave him a discharge after just over six years in the Army. His record showed that he had two Good Conduct Badges – earned after two and six years service – and had gained a 3rd class education certificate, the qualification he would have needed if promoted to sergeant. He left the Army on 22 December 1874 and returned to his parent’s house at 3 Old Francis Street, Deptford, London and became a railway policeman, working for the South Eastern Railway at London Bridge.

The following year, on 11 April 1875, he married Evangeline Bradley at St. John’s, Deptford New Town and the couple lived at 8 King Street with Evangeline’s parents.

George did not stay in the service of the railway company for long and by 1876 was a general labourer at a tea wholesaler where he did painting, carpentry and work in the stables.

Sydney George Bathe was born in 1877 and William Harry Bathe followed in 1879.

In 1879 George wrote to the Farm School saying that he expected to get a post with the London School Board at the new school at Tanners Hill but in 1881, he again wrote to the school, this time to ask for help as he was out of work. He said he only got 6d a day in army pension. The school’s management gave George the job of drillmaster and messenger.

By this time Percy Bathe had arrived and Evangeline was staying with her parents at 8 King Street in Deptford with the four children – working as a dressmaker.

However, within a short time, she moved the family to Nutfield, near the Farm School, where the next two children were born: George Edward Bathe in 1883 and John Victor Bathe in 1886. In March of that year the whole family moved back to London and settled in Sydenham where Mabel Sarah Bathe was born in 1889 followed by Florence Eva Bathe in 1891 and Stanley Albert Bathe in 1896.

After the family moved to Sydenham, George turned his hand to photography. He is listed in directories from 1886 to 1895 as having his studio at 54 Miall Road in Sydenham – although he was working for the Gas Company at the same time. By 1895, George was no longer advertising as a photographer. No other photographer appears to have used that address either before or after George.

George spent at least seven years working at the Crystal Palace, where he did painting and other maintenance work, and then he took a job with the Gas Company which had its works at Bell Green, Sydenham. In 1918 he was described as a lamp repairer at the gas works and later as a tinsmith.

George William Bathe lost two of his children in his lifetime and he, himself, died of senile decay in Lewisham Hospital, London on 14th January 1934. He was 86 years old and was buried at Ladywell & Brockley Cemetery. A little over a month after George’s death, Letters of Administration were granted to his widow, Evangeline, for his estate, which total £196 3s 9d.

Evangeline lived into her nineties and died of old age on 22 January 1950 at the home of her daughter Mabel, in Brixworth, Northamptonshire.

Child 3 William Harry Bathe born 1879 in Deptford. Served with the Imperial Yeomanry in the Boer War and the Canadian Ordnance Corps in the First World War. Died 1957

Child 5 George Edward Bathe born 1883 in Nutfield, Surrey. Emigrated to Canada and served with the Canadian Engineers in the First World War.

Child 6 John Victor Bathe born 1886 in Nutfield, Surrey. Became a postman who served in Salonika with the Royal Garrison Artillery during the First World War. Died 1940

We do not have any examples of George’s work at present. Can you help? If so, please contact us.