Ernest came to photography as a profession late in life following a move from Ashton under Lyne to Llandudno in Wales in 1912 when in his forties.

By 1915 Ernest was advertising his Craig-y-Don Studio at 1 Mostyn Avenue, Llandudno and continued there until 1925 by which time he called his studio the Craig-y-Don Garden Studio. He continued to advertise until 1928.

Three of Ernest’s sons, Herbert Needham Spencer, Ernest Spencer junior and Rupert Spencer were all involved with the studios.

1871 – age 1, at Mount Pleasant, Hurst, Ashton under Lyne  with parents and two sisters and one brother

1891 – age 21, at Turner Street, Ashton under Lyne (occupation – circular sawyer) with his wife Fanny and their son Charly (sic) aged one year old

1901 – age 31, at 7 Hall Street, Ashton under Lyne (occupation – wood sawyer) with his wife Fanny, their three sons and one daughter

Ernest Spencer’s father was Lewis Spencer who was born about 1840 in Belper, Derbyshire and was a minder and a cotton mill driver. His mother, Elizabeth Spencer (nee Bramley), was born in 1839 in Sutton in Ashfield, Nottinghamshire.

Ernest had many occupations; his first being a felt hatter at the age of 11 and then a sawyer and then he went on to be a railway goods checker and insurance agent before taking up professional photography.

Ernest was a Methodist and became one of the founding members of the Hope Chapel, Curzon Road, Hurst, Ashton under Lyne in the 1880s.

In April 1890, Ernest married Fanny Needham in Ashton. Fanny was born in 1869 in Chesterfield registration district in Derbyshire. 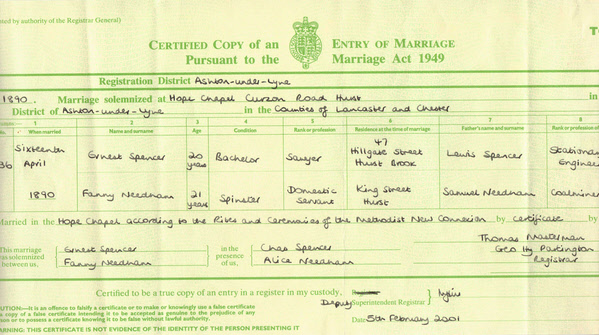 Their first child, Charles, was born in 1890 and by 1891 Ernest and Fanny were living at Turner Street, Ashton under Lyne and Ernest was a ‘circular sawyer’. The census recorded that they had a son called Charly (sic) who was one year old. Further children followed, Herbert Needham Spencer in 1893, Ernest Spencer junior in 1896, Alice Spencer in 1899 and Oliver Spencer in 1900 but unfortunately Olive died only 13 days after she was born.

By 1901 the family had moved to 7 Hall Street, Ashton under Lyne and Ernest was still described as a wood sawyer. They lived with their three sons (Charles, Herbert N and Ernest junior) and one daughter, Alice who was aged two years old. Alice also died young in 1903.

Another daughter, Edith,  was born in 1902 but she too died in childhood in February 1904. 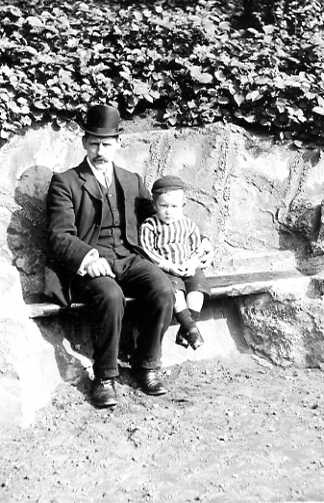 Ernest Spencer and his youngest son Rupert - about 1908

In 1911 Ernest and Fanny were living at 67 Leam Street, Ashton under Lyne. Ernest was an insurance agent and Fanny was a house keeper. They had four sons living at home, Charles Spencer aged 20 who was a ’piercer’ at the cotton factory, Herbert Spencer who was 17 and had the same occupation, Ernest Spencer junior aged 14 who was an apprentice at a printing works and Rupert Spencer aged five who was at school.

Tragically, the 1911 census records that Ernest and Fanny had had nine children altogether of which only four remained alive. Olive, Alice and Edith died young and two other children had also been born after 1901 but had not survived until the 1911 census. Only four sons lived into adulthood

On a brighter note, there was a family tradition to go to Aberystwyth on holiday before they moved permanently to Llandudno. Below is a picture taken near Llandudno in about 1909. It was also probably taken on a family holiday in Wales 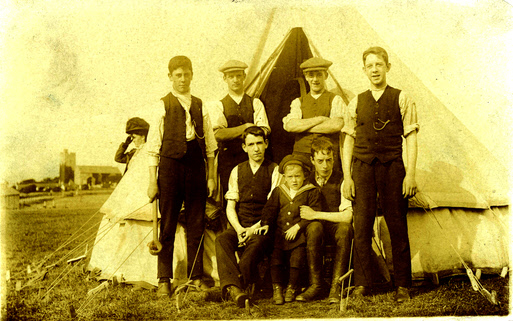 The back line is thought to be - left to right - Ernest junior, unknown, Herbert Needham, Charles. Front row - the little guy is Rupert, the other two are unknown. The church is near Llandudno. Fanny Spencer is in the background. Photo taken about 1909.

In 1912, the year of his mother’s death,  Ernest and his family located permanently to Llandudno, North Wales and lived at a house named Brookhurst in Queen’s Road off Mostyn Avenue. 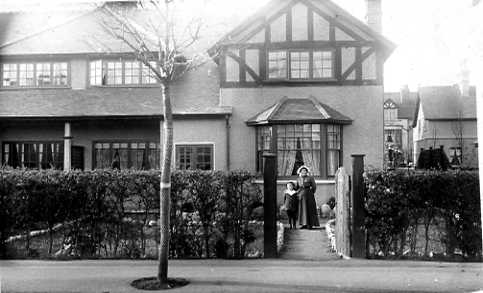 Fanny Spencer with Rupert outside of Brookhurst, the family home in Queen’s Road, Llandudno

The reason for Ernest’s move to Llandudno is not certain but it is thought that it was to open a studio and operate as a professional photographer.

In 1914, Ernest, at 44, was too old to be called up for the first world war. However, his three eldest sons did join up to a Welsh Regiment – and all survived. 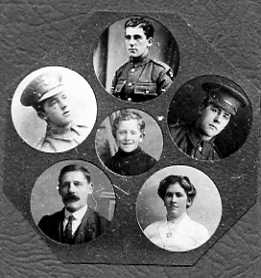 Composite photograph of Ernest Spencer, Fanny Spencer and their 4 sons taken about 1914

However, it is interesting to note that Fanny had a brother, John Henry Needham, who also moved to Llandudno a few years after Ernest, in 1919, and owned Needham’s Bakery in Mostyn Avenue, Llandudno. A picture of his van is shown below. John Henry Needham later became Leader of Llandudno Council for a year in the 1930s. 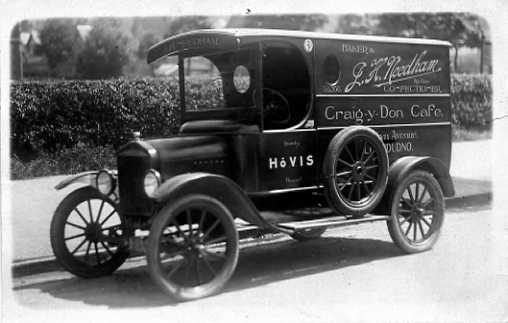 By 1915 Ernest was advertising in trade directories as a photographer located at his Craig-y-Don Studio at 1 Mostyn Avenue – conveniently near his home – and continued to advertise until 1919. Although he appears to have stopped advertising, it is almost certain that he continued to operate there until he started to advertise again in 1925.

By 1925, although Ernest was advertising at the same address, he called his studio the Craig-y-Don Garden Studio and he continued to advertise in this manner until 1928. 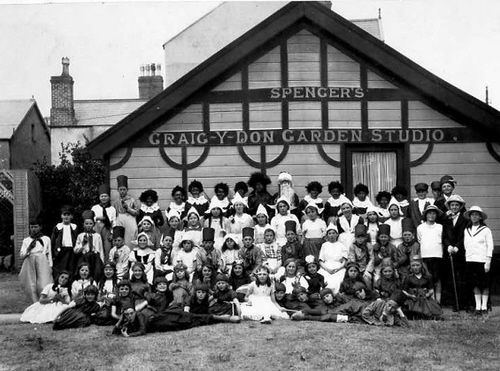 In 1926, Ernest Spencer opened a second studio in Llandudno at 12 & 14 Gloddaeth Road & Great Orme’s Road which was advertised until 1929.

The original owner of the studio at Gloddaeth Road, from the 1860s, was Thomas Edge who took photos of all of Dean Liddell’s daughters there. One of the daughter s, Alice, was reputed to be the inspiration for Lewis Carroll’s ‘Alice in Wonderland’.

The National Archives of Ashton Infirmary hold photographs that Ernest copyrighted.  His photographs also appeared in various histories of the area and books on various subjects including hospitals and church and Sunday school anniversaries.

There was a strong family connection to photography. Ernest trained a niece, Emma, from Ashton under Lyne in the profession of photography which she did practice but there is no evidence of her advertising a studio of her own.  Emma was the daughter of Charles Spencer, Ernest’s brother, who was not a photographer but he was a founder member of Hope Chapel, Ashton.

With the exception of Ernest’s son Charles, the other three sons, Herbert Needham Spencer, Ernest Spencer junior and Rupert Spencer, were at some time involved with the studio(s). Whether they were actually employees or also photographers with their own businesses is not known but a photographer called H N Spencer did have a studio at 31 Chester Road, Macclesfield, Cheshire in 1914. It is not known if this was Ernest’s son Herbert Needham Spencer. 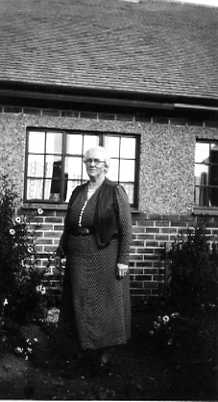 In later life Ernest Spencer senior moved from Queens Road to Penrhyn Bay near Llandudno where he eventually died of heart failure on the 13th February 1952 at the age of 82. He is buried in St. Tudno’s cemetery, Great Orme overlooking Llandudno Bay and his wife, Fanny, and their three sons are also buried there.

Below is a copy of Ernest’s death certificate. 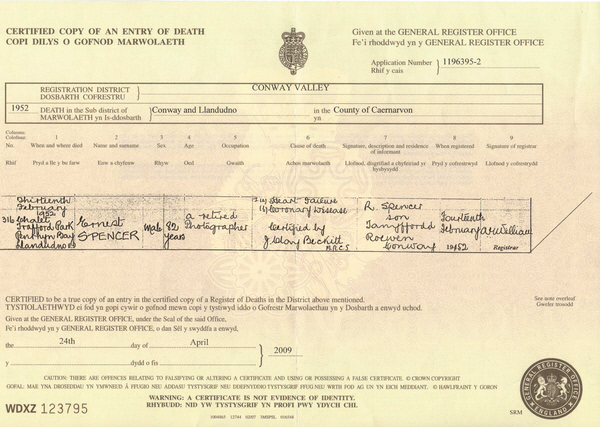 The only one of Ernest’s children still surviving at the time of his death was his youngest son – Rupert.

Born 1870 in Ashton under Lyne

Married 16th April 1890 to Fanny Needham in Ashton under Lyne

Examples of Ernest’s photography are shown below. If you have any others, please Contact Us. 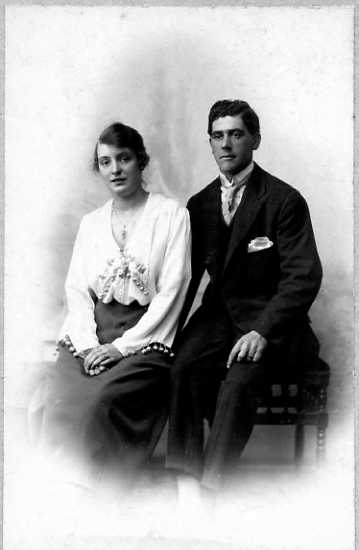 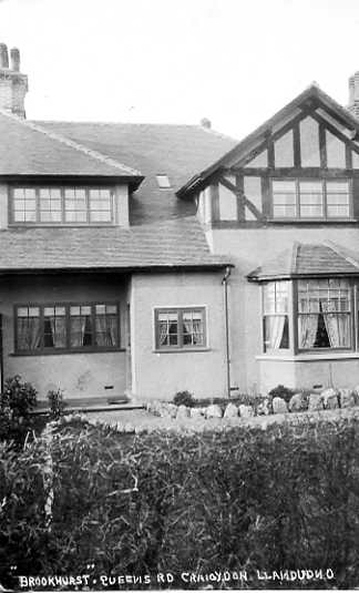 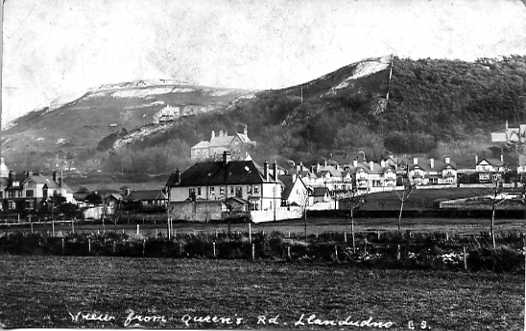 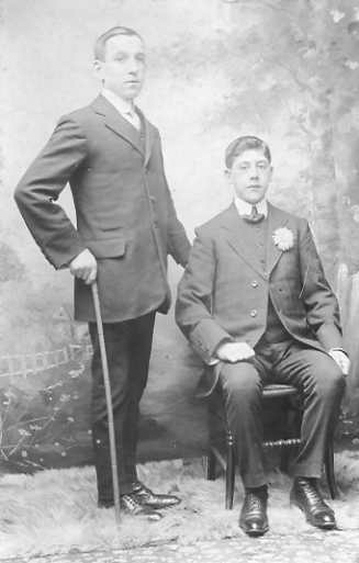 Charlie Spencer and Herbert Spencer in their father’s studio. 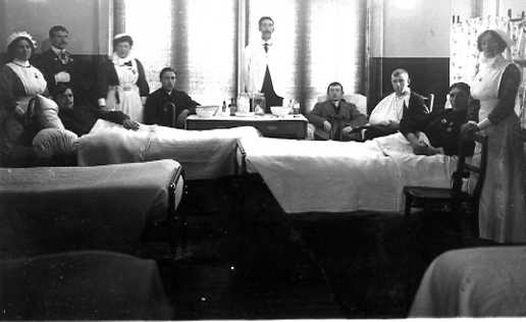 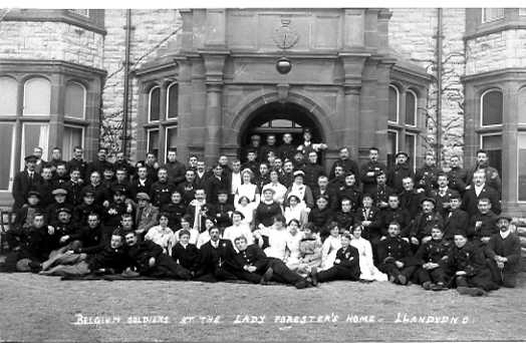