Henry started off his working life as a schoolmaster, teaching painting and drawing.

By 1890, when he was 39 years old, he started to advertise as a photographer in Landport, Hampshire and continued to advertise another studio in Landport before moving his studio to nearby Portsea. He advertised in trade directories up until 1903 – the year of his death.

By 1871, when he was 21, Henry had moved to London and was living at 36 Renfrew Road, Lambeth. He was working as a schoolmaster.

Henry went to a Methodist Teacher Training College in London where he met Helena Eliza Jenkins who was later to be his wife. Helena had been born in Westminster in London in 1852.

On the 22 December 1877, when Henry was 26, he married Helena at Clapham Chapel in Wandsworth, London.

Very shortly after the wedding, Henry returned to Portsmouth with Helena to set up home.

By 1881, Henry was already showing an interest in photography and a delightful family group taken by him is shown below. 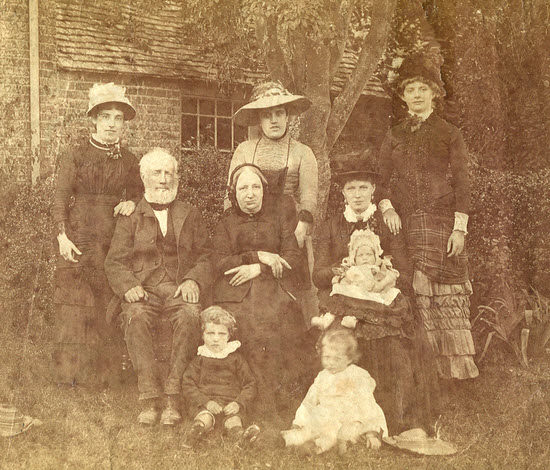 Photograph by Henry James Nobes taken about 1881/2 of his wife Helena Nobes (sitting), with three of their children and her parents. The three ladies standing at the back are probably family members

Three years later, in the 1881 census, Harry and Helena were recorded as living at 5 Regent Street, Portsea, Hampshire, a part of Portsmouth. His occupation was stated as a teacher of drawing.

Henry rose to be a head master and he also taught evenings in the Art School. He was told he couldn’t do both jobs so he gave up the teaching job and became a professional artist and part time art teacher, even though he had a large family.

In the spring and the summer he used to live in the country and painted and visited private schools on a horse and trap to take art classes. In the winter he moved back to Portsmouth to sell his paintings and to paint ships visiting Portsmouth. He used to paint the ships as if they were in a storm.

BY 1890 he had became interested in photography and opened a photographic studio at 71, Fratton Road, Landport. 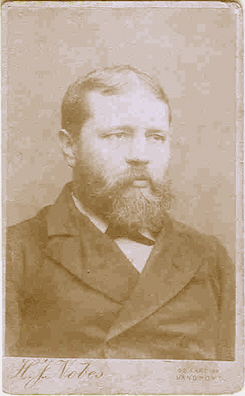 Henry Nobes self portrait about 1891

The census in 1891 showed Henry, then 39, living at 52 Lake Road, Portsea, Hampshire. He was listed as being a photographer and a painting and drawing master. Henry also had a photographic studio at this same address and advertised it until 1896. 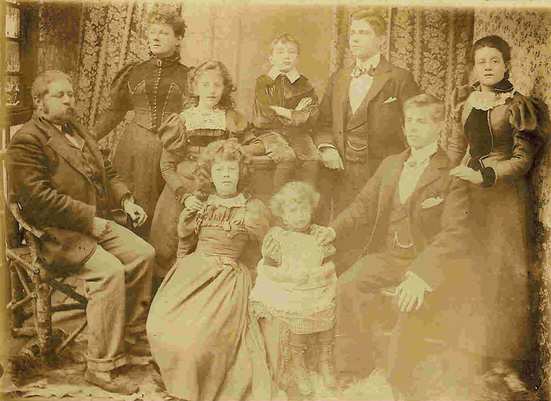 Their last child was born in 1895 in Portsea, a little son who they named Victor Arthur Nobes.

In 1896, Henry moved his studio to 16 Marlborough Row, Portsea and the 1901 census shows him and his family still living at that address. His occupation was listed as an artist and photographer.

Around this time Henry started to produce his paintings as postcards and sold them to the many sailors in this major naval port.

Henry enjoyed an active social life with a group of men who were considered the Portsmouth Society, visiting Turkish baths, oyster bars and cafes. Apparently Conan Doyle practised as a doctor near the Turkish baths – perhaps Henry knew him.

A family wedding in September 1902 provides an image of Henry and his wife Helena – see below. 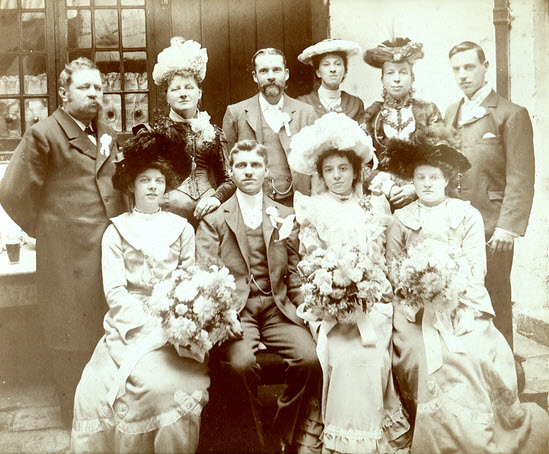 Herbert Harry Nobes, Henry’s eldest child, was also involved in photography. He gave his occupation as ‘photographer’ of Marlborough Road, Portsea when he gave evidence at an unlawful wounding case at Portsea Police Court in 1897 (Hampshire Telegraph and Sussex Chronicle 8 May 1897).

He may have worked in his father’s studio but it does not appear that he kept pursuing his father’s occupation professionally as he was listed in the 1901 census as a fruiterer living at 172 Fratton Road, Portsmouth at the home of fruiterer and shopkeeper Hannah Smart.

In 1901, Herbert married Ellen (Nellie) Annie Sibbick. They had 3 children. Herbert apparently joined the merchant Navy but jumped ship in New York and his family followed him to the USA in 1908 aboard the Majestic.

Herbert was living in the Bronx, New York working as a bartender in the 1910 census and listed as a waiter in 1915, 1916 and 1917 in New York directories. He is once again listed as a photographer living at 143 East 235th Street in the 1920 directory but gives his occupation as wireman at a rubber factory in the census of that year. Herbert died in 1969 in Monroe, Louisiana.

Below are examples of Henry’s photography.