Joshua started work as a labourer in a steel works but later opened a photographic studio (hut!) in Thurlstone, West Riding of Yorkshire.

By 1889 when he was aged 36, Joshua moved the studio to Vernon Place which was at the rear of 6 Bridge Street, Penistone and stayed there until 1936 although the business became Joshua Biltcliffe & Sons in 1904. Joshua ran a general stores at the same address.

Around 1904 Joshua Biltcliffe & Sons opened up a studio in Skelmanthorpe, just a few miles away, and advertised under that name until 1937.

As well as having a portrait studio, Joshua and his sons photographed all of the local activities and produced many of their photos as postcards.

Joshua Biltcliffe was born in 1853 in Penistone, West Riding of Yorkshire and was the son of John Biltcliffe, a cordwainer, and Jemima/Jenny Marsh. He had an older brother Edwin born in1850 and, later, a younger sister called Alice born in 1857. A cordwainer is somebody who makes shoes and other articles from fine soft leather.

In the 1861 census, Joshua is aged seven and was living at Market Place, Penistone, West Riding of Yorkshire with his father, mother and two siblings.

Ten years later in 1871 Joshua was no longer a scholar and, at the age of 17, was working as a labourer at the local iron works. He was still living at home but his family had moved to Penistone Street, Penistone.

On the 2nd December 1876 Joshua married Mary Hannah Wood who was a couple of years younger than him. The ceremony took place at the Netherfield Independent Church in Penistone.

In 1881, Henry Biltcliffe was born at Thurlstone and in the census of that year, at the age of 27, Joshua and Mary his wife and their three boys were living at Prospect Terrace in Thurlstone. He was described as a steel works labourer.

In 1882, their last child, Frederick William Biltcliffe, arrived. In due course, Frederick also became a photographer in the family firm.

Joshua’s mother died in 1884, six years before his father.

At some time prior to 1889, Joshua changed his life and opened his first photographic studio in a small hut at The Prospect in Thurlstone. He is seen below repairing the studio skylight. 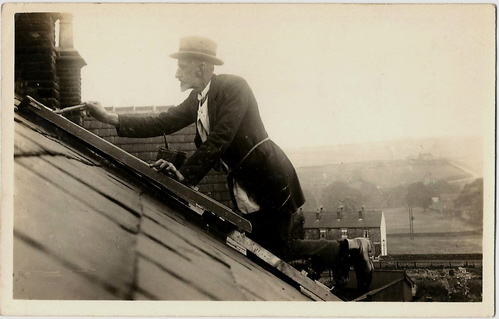 By 1889 he had moved to the town of Penistone and opened a store at 6 Bridge Street. He moved his studio hut from Thurlstone on the back of a cart and attached it to the back of the store in what was known as Vernon Place (possibly also known as Vernon Terrace). A showroom, picture frame workshop and darkroom were also added. 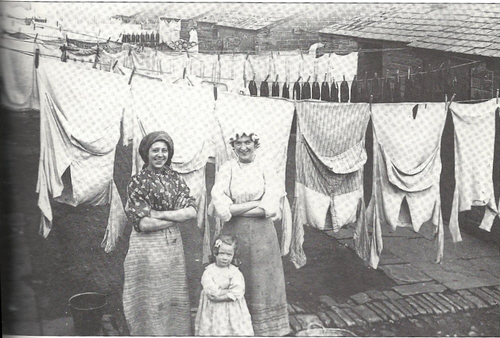 Sheila Baker, Joshua’s great granddaughter says “I also came up with a reference to Vernon Terrace. It is the yard at the back of the row of houses in Bridge Street (where I used to play as I was born at no. 6 Bridge Street) but I don’t remember it being known as Vernon Terrace it was always Bridge Street to me. I vaguely remember my mum telling me that the picture above was where we used to live and now I have looked at it, they are all the outhouses at the back of Bridge Street. Amazing, I had forgotten about this.”

In 1889 Joshua advertised in trade directories as a photographer and continued to advertise there in his sole name until 1904.

Joshua was also very involved in music and in the church. He took a very active part in the Netherfield Congregational Church and at one point was a Senior Deacon as well as singing in the choir – see below. 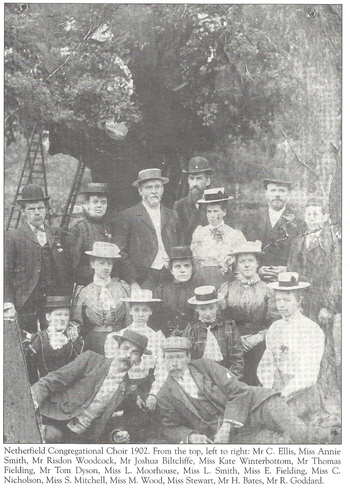 Joshua Biltcliffe with the Netherfield Congregational Choir in 1902

Joshua’s sons, John Thomas and Fred, must have both got their musicality from their father. John Thomas played the piano (was it the one shown in the picture of Joshua and Mary’s living room at 6 Bridge Street – see photo at the end of this biography?). Frederick was also musical and wrote music and songs which he had copyrighted.

Joshua also followed through his musical interest by publishing postcards which combined words and music with a photograph of the local area (see below). His son John Thomas Biltcliffe also continued to produce these charming and unusual postcards. 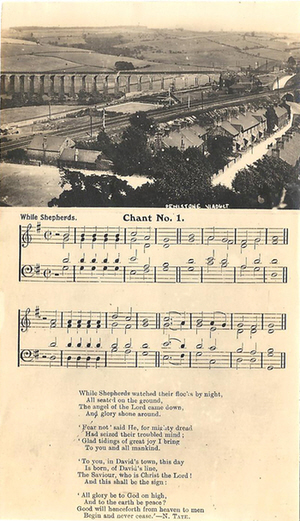 Postcard by Joshua Biltcliffe showing words, music and a photo of Penistone Viaduct

In 1890, Joshua lost his father, John, and the boys lost their grandfather. He died at the age of 70.

However, in the 1901 census the three older boys in their early 20s were shown as working for the railway company and Frederick aged 18, the youngest, was a carpet apprentice. 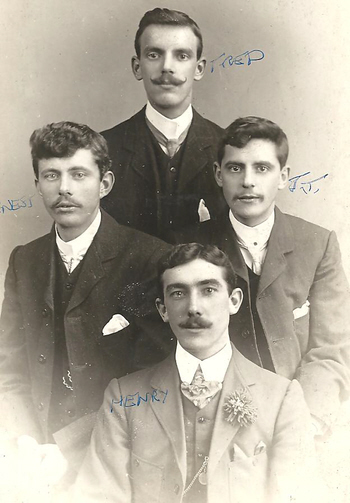 In 1904, Joshua changed the name of the business to J Biltcliffe & Sons and it continued in that style until 1936.

Around 1904, a studio was opened at Skelmanthorpe by Biltcliffe & Sons. Skelmanthorpe is a large village eight miles to the north of Penistone and by 1926 Frederick was running the Skelmanthorpe studio in his own name. Meanwhile, J T took a more leading role in the Penistone studio.

The business at 6 Bridge Street continued to flourish and, interestingly, there was a row of 6 houses to the left of the shop which, in later years, were purchased by J T Biltcliffe. There was an alley between the shop and the houses, affectionately known as Bump Hinchcliffes, which lead to a kind of bus depot. 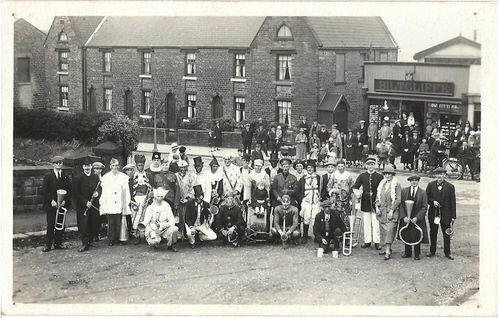 Joshua Biltcliffe’s store at 6 Bridge Street, Penistone with celebrations at the end of WW1. The family houses are to the left and the studio was at the rear of the shop

An interesting photograph, presumably by Joshua shows his wife Mary and other family members. He was obviously experimenting with flash powder to illuminate his photographs and actually marked his family photo as such – see below. 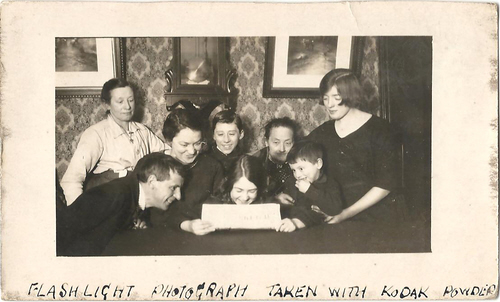 In 1918, Joshua and Mary became grandparents.  Their son J T and his wife presenting them with a grandson named Charles (Charlie).  He is shown below on his grandmother’s lap. 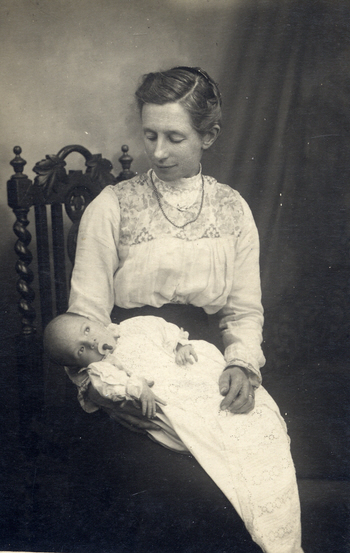 Mary Biltcliffe with her new grandson Charlie in 1918

Joshua and J T recorded all of the local events such as gatherings, festivals and sports activities as well as weddings etc.  They left behind a wonderful social record of Penistone and district during the latter part of the 19th century and the first 40 years of the 20th century.  Many of the pictures were produced as postcards and many still exist today.  One particularly interesting postcard which must have been taken by J T actually captures Joshua right in front centre of the crowd immediately behind the bandsmen – see below. 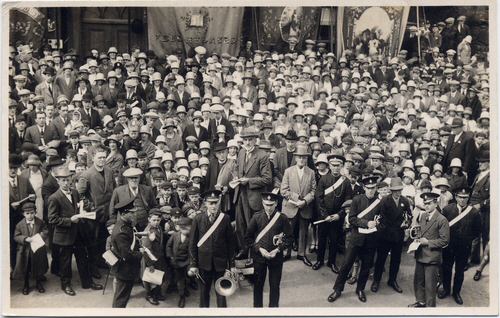 Meanwhile, Henry Biltcliffe, although not a photographer, followed in his father’s footsteps as a shopkeeper, owning a confectioner’s shop at 15 Market Street, Penistone. 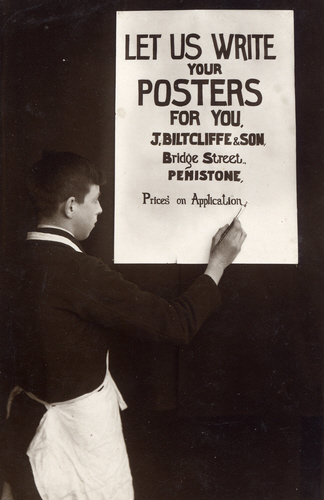 Joshua was very much a family man and a photograph, taken in Joshua’s and Mary’s living room in 6 Bridge Street, Penistone, shows a private view of their life. It is interesting as it includes a piano which would have been a big part of their family life. 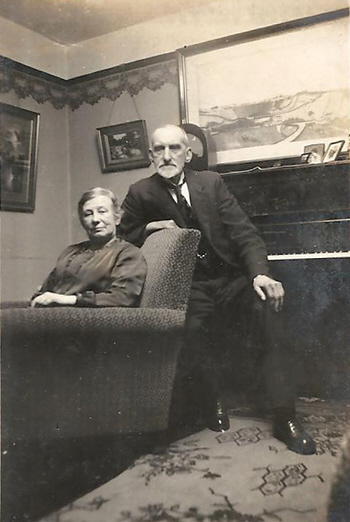 Joshua and Mary Biltcliffe in their latter days at home in Bridge Street, Penistone

Joshua died on the 10th November 1937, at the age of 84, and J T carried on the business until 1964 when it eventually closed and the shop was demolished.

Joshua’s probate was granted to Mary his widow and John Thomas his son. He left net assets of £259.08 – see notice below.

Joshua’s church also printed a moving eulogy for him – see two pages below. 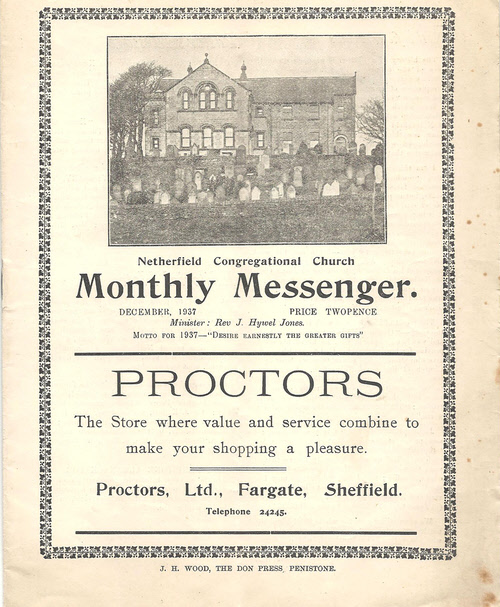 Below are examples of Joshua’s photography 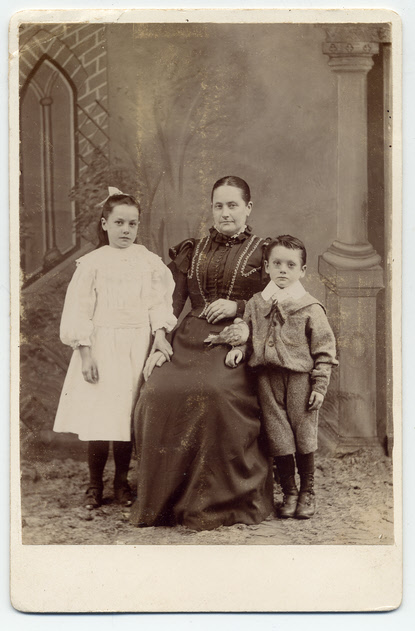 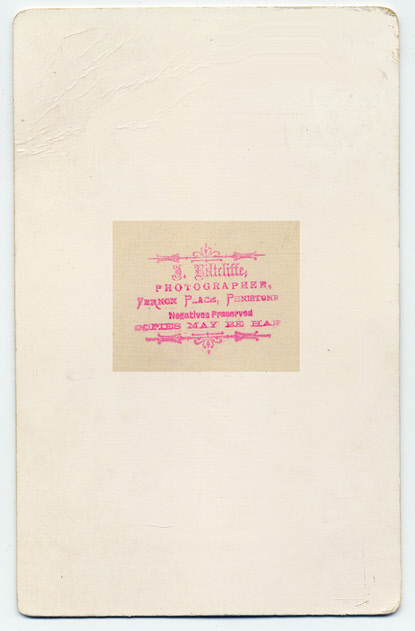 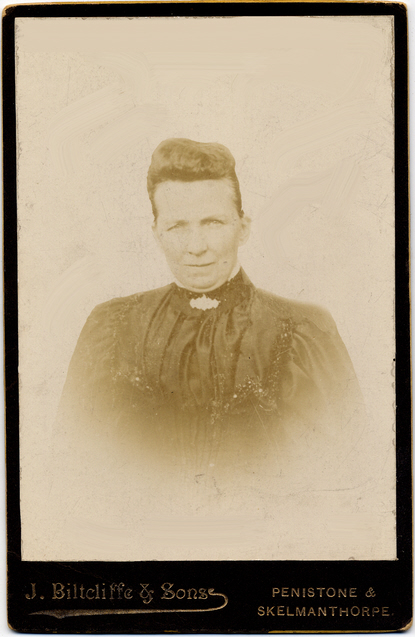 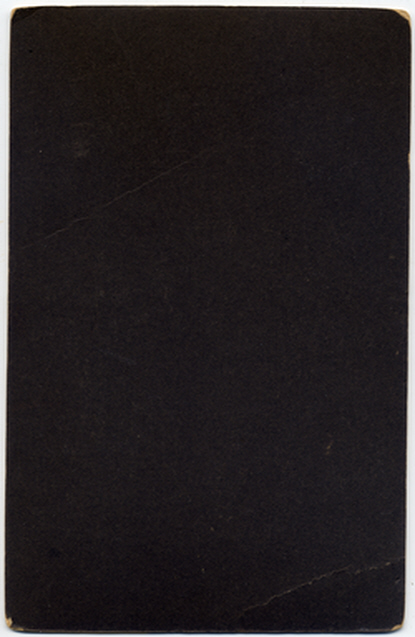 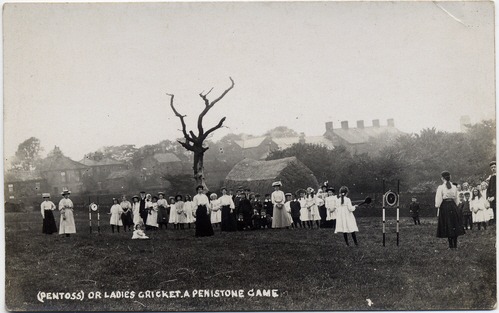 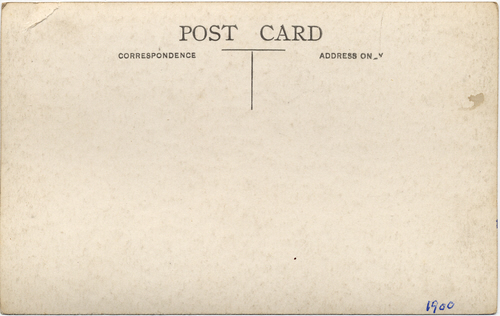