Abraham appears to have operated from only one studio at 4 Commerce Road, Wood Green, Tottenham, North London, Middlesex. He was described as a photographer between 1864 and 1887. However, he advertised himself as both a photographer and a watchmaker and it was not uncommon to combine photography with other occupations in Victorian times. 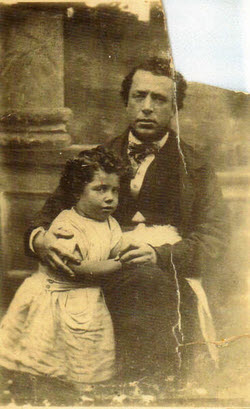 Abraham was a member of a large Jewish family, originating in Italy, which had branches in London, Manchester, Hamburg, Paris, Gibraltar, Guatemala and probably elsewhere. Most members of the family are now of other faiths.

Little is known of Abraham’s early life but by June 1841 he is listed in the census as being aged 20, a traveller, living with his future brother in law, Samuel Nunez a stonemason at Fieldgate Street, St. Mary Whitechapel, Tower Hamlets in London. It is also stated that he was born ‘in the same county’. Abraham usually referred to himself as Abraham but sometimes as Augustus.

And on the 18th August 1841, at the age of 21, he married Samuel’s sister Clara Nunez in London. Clara had been born in 1820. The records of the marriage showed that he lived at 14 Heneage Lane, St. James Dukes Place in the City area of London, not far from Whitechapel and the East End and he was described at that time as a cigar maker.

By the time of the 1851 census Abraham had moved further to the east to 9 New Road, Stepney in London and was still working as a tobacconist and cigar maker

By 1855 Abraham had met Lydia Mendes Belisario and they married in London on the 5th December 1855 and Abraham was described as a cigar maker. Abrahams address was 1 Montefiore Buildings, Jewry Street back in the East End and very near where Abraham had lived previously at Heneage Lane.

Lydia had been born in 1836 and was only 19 when they married whereas Abraham was recorded as a widower aged 32. Within a year, in 1856, Lydia died. They had no children.

In 1856, Abraham was a tobacconist and shopkeeper but by 1857 it appears that he was having financial problems – see below:

THE LONDON GAZETTE, JANUARY 20, 1857. COURT FOR RELIEF OF INSOLVENT DEBTORS

The following PERSONS, who, on their several Petitions filed in the Court, .have obtained Interim Orders for protection from process, are required to appear in Court as hereinafter mentioned, at the Court-House, in Portugal Street, Lincoln’s-Inn, as follows, to be examined and dealt with according to the Statute: On “Wednesday the 4th February, 1857, at ten o’clock precisely, before Mr. Commissioner Murphy. Abraham Augustus Ascoli (known also as Augustus Ascoli), formerly of Back Road; Shadwell, General Dealer and Journeyman Cigar Maker, then and now of. No. 17, Tothill Street, Westminster, Tobacconist and Photographic Artist, and during part of the time whilst residing at the last-mentioned place, sometimes trading under the name of Joseph Lara, all in Middlesex.

In the 1861 census Abraham was described as a 37 year old artist living at High Street Van, White Hart Yard, Southminster in Essex. He had his 17 year old son Joseph with him.

Around this time Abraham met Charlotte Everitt who was about 12 years younger than him, being born in 1832.

Their first son, Abraham Arthur, was born in 1861 and Daniel followed along in 1863 before Abraham and Charlotte married in Colchester, Essex on the 22nd of January 1864. Abraham was stated as being a 38 year old widower at the time of his marriage, a photographer and living at North Street, Colchester, Essex.

Their family grew rapidly with the additions of Rebecca in 1865, Miriam/Marion in 1866 and Ezekiel Reginald in 1868.

The 1871 census shows Abraham, aged 48, at 4 Commerce Road, Tottenham, London, although he was ‘born in Paris’ and his birth year is given as 1823! His occupation was ‘watchmaker’.

A Post Office Directory of 1874 shows him as a watchmaker and still living in Commerce Road, Tottenham.

It seems that Abraham’s financial woes were not at an end as another bankruptcy loomed in 1878 – see below:

The Bankruptcy Act. 1869. In the County Court of Middlesex, holden at Edmonton. In the Matter of Proceedings for Liquidation by Arrangement or Composition with Creditors, instituted by Augustus Ascoli, of 4, Commerce-road, Wood Green, in the county of Middlesex, Watchmaker and Umbrella Manufacturer. NOTICE is hereby given, that a First General Meeting of the creditors of the above-named person has been summoned to be held at my offices, 3, Fumivals Inn, in the city of London, on the 8th day of January, 1878, at three o’clock in the afternoon precisely.—Dated this 20th day of December, 1877.

THOMAS A, ROMER, 3, Furnival’s-inn, London, Solicitor for the said Debtor.

The outcome of this petition is not known at present.

Six years later, Abraham was still working as a photographer when he died at Southgate Road, Wood Green, North London on the 31st August 1887 (age 65). His cause of death was stated as ‘Cardiac disease for some years – Syncope’ – [a sudden loss of consciousness, with momentary premonitory symptoms or without warning, due to cerebral anemia caused by obstructions to cardiac output or arrhythmias such as ventricular asystole, extreme bradycardia, or ventricular fibrillation]. 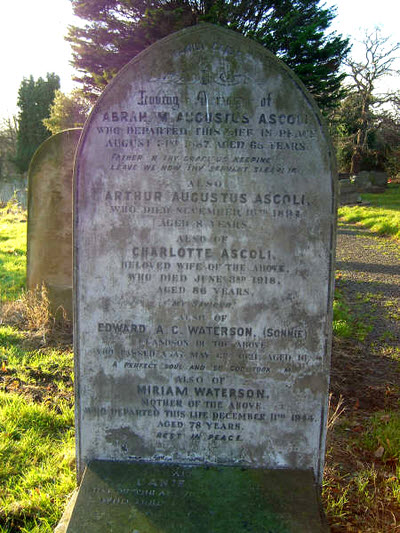 He was buried in Tottenham General Cemetery, London – Grave No. 1792 in a family plot. Also buried there are his grandson Arthur Augustus Ascoli aged 8, his wife Charlotte Ascoli who died in 1918, aged 86, his daughter Miriam Waterson [nee Ascoli] aged 78, her son Edward Waterson aged 16 and his son Louis Daniel Ascoli aged 78.

Abraham’s brother Moses died in 1860 – he was the great great grandfather of Gina Marks who provided his life story which is recorded above.

Just to show that photography was not always an easy life:

From “The Illustrated Photographer” A NICE CUSTOMER TO TAKE –

Mr John Edmunds was brought up on a warrant by Inspector Westlake, Y Division, charged before Mr. Bodkin, with threatening and assaulting Mr. Augustus Ascoli, a photographer. It was stated that the complainant on Friday, the 5th of February went to the defendant’s house to take half a dozen cartes de visite. The defendant asked him and his son into the parlour, where some ale was given to them. While there, the defendant’s wife said that the complainant had insulted her one day while she was standing at the door. Mr Ascoli denied having done so, but the defendant got in a great rage, took a lance from the corner of a room, brandished it about and threatened to run him through. Complainant took to his heels, followed by the defendant and escaped into the street. He got safely home and hid himself for a couple of days. He was in fear that the defendant would do him some bodily harm. The defendant denied the charge. Mr Bodkin ordered the defendant to find two sureties in £100 each, and himself in £200, to keep the peace and be of good behaviour towards Mr Ascoli and all Her Majesty’s subjects for the next six months, and to pay the costs £2.16s.