Edwin Herbert Rhodes was in the photographic business in the same studio in Nantwich, Cheshire for nearly 20 years in the 1860s, 1870s and 1880s. He last advertised in trade directories in 1883.

He was also a jeweller, bookseller and stationer.

Edwin Herbert Rhodes was baptised plain Edwin Rhodes on 4th September 1833 at Astbury, Congleton, Cheshire. He was the first of ten children born to Joseph Rhodes (born 12 November 1802 and baptised/christened on 5 December 1802 in Wolstanton, Staffordshire). Joseph Rhodes was a saddler by trade, and his wife Sarah (nee Buckley). Joseph and Sarah had married on the 7th May 1832.

By 1837 the family had moved to Hospital Street in Nantwich, Cheshire but during the late 1840’s they moved to High Street, Nantwich where Joseph continued his trade; later records show it was No.18 which was previously The Griffin Inn (and in 2011 a dry cleaners).

Census records for 1851 show that Edwin followed his father and became a saddler.

The arrival of the railway in Nantwich in 1858 must have had an impact on trade as during 1859 Edwin’s father was declared bankrupt (ref. London Gazette April 12 1859). Perhaps this helps to explain why Edwin moved away from the saddlery business within a few short years.

Census records for 1861 show that Edwin was still a saddler.

The first record found of Edwin as a photographer is in the Photographic News of 20th March 1863 where ‘Mr. E. H. Rhodes’ of High Street Nantwich, submitted three photographs of Wybunbury Church and vicarage.

This is followed by entries in various commercial and Post Office directories from 1863 onwards including:-

Also, the following advertisement appeared in the Cheshire directory of 1864 (page 44): 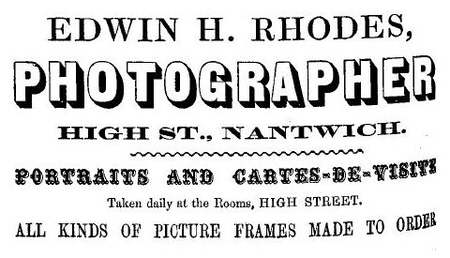 In 1868 Edwin’s father died; however the family remained at High Street, Nantwich.

In 1871 Edwin’s occupation was listed as a photographer instead of as a saddler.

On the 1st January 1873 Edwin married Eliza Lloyd in Sissinghurst, Kent. Why they married so far away when she was born relatively local to Nantwich is unknown. The only tenuous link is that one of the witnesses (a local farmer) had someone staying with him (according to a census) who worked for the Civil Service, as did one of Eliza’s sisters.

On their marriage certificate Edwin gives his occupation as ‘jeweller’ and, although no occupation was listed for Eliza, she was a well established lady, being the principal of a Ladies Seminary School at Churches Mansion, Nantwich. 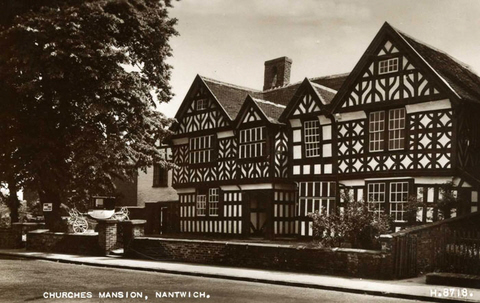 Churches Mansion was a very old building as the Churche family had come from Leicestershire, and bought property in Hospital Street, Nantwich about the middle of the fifteenth century. The family prospered as merchants and bought other estates in Cheshire and Shropshire.

Edwin and Eliza had no children but they did have many nephews and nieces to whom Eliza left their belongings.

In 1874, Edwin is listed as a ‘Bookseller, Stationer & Jeweller’ with photography as a sub heading. 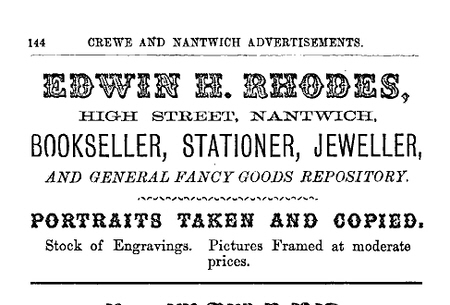 Meanwhile, Eliza was still the principal at the school at Church’s (sic) Mansion. 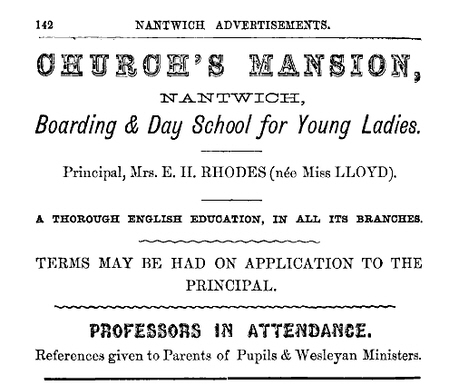 There had been a poultry show for a number of years in the mid to late Victorian Nantwich and the name E H Rhodes appeared as an organiser etc. (Ref. several editions of “The Journal of Horticulture and Cottage Gardener – later with the additional title “and Country Gentleman”) and he was well praised for his work. Both Edwin and his wife would have been well known in the town as Eliza ran a private school in one of the most notable buildings in Nantwich – Churches Mansion.

In the 1881 census Edwin is a ‘stationer’ living at Churches Mansion so it is most likely during the late 1870’s that he turned his full attention to theological matters as his shop sold bibles and as he was heavily involved in the Wesleyan Church and the Bible Society. Local papers show the couple at many Wesleyan events in the area.

Edwin last advertised as a photographer in trade directories in 1883.

In 1888 Eliza had a serious rail accident in Crewe, Cheshire which resulted in a successful action against the London and North Western Railway. She lost her left leg for which she was awarded £1,000.

The couple continued to live in Churches Mansion until their deaths.

Edwin died on the 22nd August 1903 at the Haydock Lodge Asylum, Haydock , Lancashire (about half way between Manchester and Liverpool) after admitting himself as a private patient; he died of melancholia (senile) and exhaustion. His death was registered in Warrington district but he was buried in his home town of Nantwich in the Nantwich General Cemetery.

In his will (which he wrote in 1885 shortly after the death of his mother Sarah and his deaf and dumb sister Sarah Anne) Edwin states he has a share in a ship called the Jersey. It is presumed that he sold this well before his death in 1903 as he left only £80. 2s 2d.

Edwin’s will read as follows:

Note – the Steamship ‘Jersey’, built by Palmers Jarrow, was launched on the 12th March 1883 and was owned by The Jersey Steamship Co. in Cardiff. She was sold in 1911 and renamed Trostan, she was sold again in 1926 and renamed Utklippan and finally was sunk in a collision during WW2 near Gedser Reef. Why Edwin had a share in this is not known but it is doubtful that he still had his share when he died due to the small amount of ‘effects’ left.

In a lengthy obituary in the Crewe & Nantwich Chronicle in 1903 (see below), Edwin is well remembered as a businessman in Nantwich and as an outstanding member of the Wesleyan Church, however there is no mention of him ever being a photographer.

Eliza died in 1905 and her fascinating will contained details of her many relatives (but no children) and of her chattels. The will read as follows:

Examples of Edwin’s photography are shown below.