The first evidence of William’s photographic career was in London and then Cheltenham although he may have well worked as an employee for someone else and therefore would not have been noted as a photographer under his own name.

By 1861 he had moved to Hereford where he had two different studios. He was in partnership with a Mr. Charles Gwatkin Hill, a portrait artist with a history of two bankruptcies at Preston.

The partnership broke up around 1864 and William moved to Brighton in Sussex in 1865 where he opened a studio before being declared bankrupt the same year.

It is not known what occupation William had between 1865 and 1870 but by 1871 William and family had moved to Christchurch, Hampshire where he was a photographer until at least 1878. By 1881 he was described as a grainer and (sign?) writer. He was known to have been a decorator and painter at some time in his life.

In 1883 William and his family emigrated to Tasmania and it seems that William probably settled in Deloraine and opened a studio. In 1888 William set up a studio in Westbury but in the same year he was declared bankrupt.

William later advertised a studio at Burnie, Tasmania in 1890 and 1891 and had a studio at 63 Brisbane Street, Launceston in 1891.

According to his wife’s death certificate, William was still a photographer in 1895.

Although he died in 1897, William was still listed as a photographer in Queenstown, Tasmania from 1899 to 1900.

1851 – age 14 at Market Place, Bromley (occupation – fishmonger’s boy) with his widowed mother, one brother and one sister.

William Pousty’s father William (senior) was a carpenter who was born in Elie, Fifeshire, Scotland and was a widower with a seven year old son, Andrew and a six year old daughter, Ann, at the time of his marriage to William’s mother Mary.

William was the second child of his father’s marriage to his second wife Mary Pousty (nee Addis) and he was born in Bromley in Kent, England in 1836.

The 1841 census shows William was four years old and was living with his parents at Plaistow Green, Bromley in Kent. William’s father was a carpenter and his mother’s record does not indicate an occupation – presumably a housewife. William was also living with an older half sister Ann Pousty (11) from his father’s first marriage to Sarah Allen, an older brother James Pousty (6), a younger brother John Pousty (2) and a younger sister Mary Pousty (eight months).  His half brother Andrew Pousty (baptised 24 February 1828) presumably died young.

1844 was a bad year for the young William when he was only 7½ years old. His father died on the 27th April and his brother John, who was almost six years old, died on the 7th May in Bromley.

The 1851 census shows William, at 14 years old, was living with his widowed mother at Market Place, Bromley. By this time William’s mother was a bookseller and stationer and William was a fishmonger’s boy. William was living with his older brother James Pousty who was an apprentice harness maker, and his younger sister Mary Pousty who was 10 and was still at school. His older half sister, Ann, would have been 21 and possibly working away from home. In fact, she married John Post in London in 1852.

The first evidence of William’s photographic career was in Regent Street, London (see advertisement in the Hereford Journal: 4 September 1861). He was 25 years old.

The 1861 census shows William as head of household in Trafalgar Place, Cheltenham. He was listed as a photographer. He did not advertise a studio in Cheltenham so it is probable that he worked as an employee for someone else.

William arrived in Hereford from Cheltenham shortly before September 1861 with a rather curious man as a partner – Charles Gwatkin Hill – a portrait artist with a history of two bankruptcies at Preston, Lancashire.

William Pousty initially set up in Castle Green, Hereford by early September 1861, moving on to 18 King Street in late November the same year.  Pousty and Hill were still together in September 1863 and William continued to operate there until 1864.

By the early part of 1864 there is no mention of Gwatkin Hill who filed for bankruptcy, yet again, at Hereford County Court in June that year.

William continued to advertise on his own account throughout 1864.

By February 1865 the premises were in the hands of the West of England Photographic Company who had rebuilt the studio.

Early in 1865, William and his family moved to Brighton, Sussex where William advertised a studio in trade directories that year. However, according to the London Gazette 21 February 1865, a William Pousty (‘artist’), filed for bankruptcy in Brighton.

It is not known what occupation William had thereafter between 1865 and 1871.

By 1871 William and family had moved again to Boscombe, part of Christchurch in Hampshire. The census shows him as a 34 year old photographic artist living with his wife Caroline Pousty, aged 36, and just two of their four children, William C Pousty and Frank E Pousty.

William advertised his studio at Purewell, Christchurch in trade directories from 1871 to at least 1875 and in 1878 he moved it from Purewell to Church Street in Christchurch.

Again, William ran into financial trouble and a meeting of creditors was announced on the 13th March 1878 for the 1st April 1878 – see below. 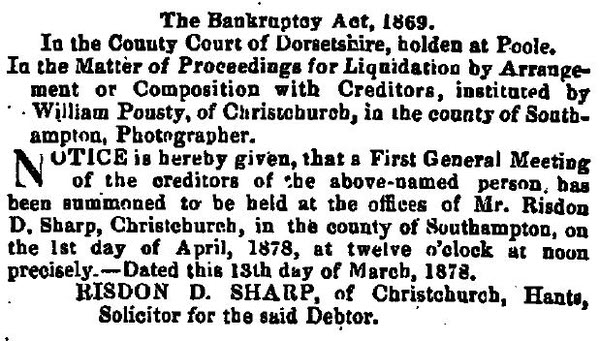 An illustration of one of William Pousty’s cartes de visite appears in Dr. Steve Edwards ‘The Making of English photography: allegories’ (Pennsylvania State University Press 2006) on page 19.  Only the front of the carte is shown.

The 1881 census shows William, at 44 years old, living with his wife Caroline and the family at 3 Maple Road, Heath Green in Penge.  William was described as a grainer and writer (someone who paints and applies a grain to imitate a different type of wood and also, probably, a sign writer). The children were Frank E Pousty (12), Harry Pousty (8), Emily Pousty (7) and Arthur Pousty aged five. Arthur was described as an ‘imbecile’ which could mean, generally speaking, that he suffered from a congenital condition and had a medical disability or that he had acquired a brain injury such as meningitis or encephalitis or a traumatic head injury etc. at any stage up to the time of the census.

Proving of the will of Mary Pousty, William’s mother.

William had lost his father many years previously so was the loss of his mother anything to do with the decision to emigrate?

In 1883 the family emigrated to Australia.

Whether there were specific money problems again, or simply that they thought they could do better in Australia and had nothing to lose, remains perhaps unresolved.

They arrived in Port Philip, Melbourne, Australia on the ‘Iberia’ on the 15th December 1883. William was with his wife Caroline and their children William Charles, Frank Edward, Harry, Emily Caroline and Arthur. The family then sailed on to Launceston, Tasmania on the ‘Flinders’. William’s occupation was said to be painter, decorator and photographer.

William and family initially settled in Burnie before moving on to live in Deloraine, buying property there, and setting up a studio. A train link having been laid in 1872 between Launceston and Deloraine, the first in Tasmania.

In 1884, soon after their arrival in Tasmania, their son Arthur died in Launceston at the age of nine. He had been poorly for several years.

In 1884 William purchased land in Elizabeth Town, Pattersonia and Upway.

In 1886 William was awarded a government contract for ‘Papering and Cementing” at Dunloran Public School. Also he painted the scene for the backdrop for the Deloraine Town Hall for which he was paid £35.

In 1887, William took photos of three views of Westbury on Jubilee Day which were purchased by the Jubilee Committee and donated to the Public Library.

In 1888 William set up a studio in Westbury but in the same year he was declared bankrupt, owing debts of £256 and he needed to sell his properties in Deloraine, Elizabeth Town and Upway; apparently keeping his property in Pattersonia in Launceston.

William advertised a studio at Burnie, Tasmania in 1890 and 1891 and the book  ‘Photographers listed as working in Tasmania 1860 – 1900s’ states that he had a studio at 63 Brisbane Street, Launceston in 1891. Brisbane Street was the main business area at the time and the same address used by his son William Charles Pousty for his electrical business.

Also, in 1891, William applied to become caretaker of the Queen Victoria Museum and Art Gallery in Launceston but although he was short listed to the last three he was unsuccessful. Was he looking for another job in additions to his photography?

According to his wife’s death certificate on the 2nd November 1895, William was still a photographer as it states her profession as ‘photographer’s wife’.

William and his sons William Charles and Harry were very musical. They apparently performed in many plays and provided singing items and did recitations for various organizations.

William’s eldest son, William Charles Pousty, led a notable life. He worked for the Post Master General in Launceston before starting out in his own business. He was responsible for the first installation of electric lighting for the Waverly Woollen Mills and street lighting in Launceston. He also provided electric lighting for the Launceston Exhibition in1891 and many other important events. He returned to England to work and also spent some years in Africa working as an electrician.

Another son, Harry Pousty, became an electrician and lived in Launceston, Tasmania until his death in 1945.

Caroline, William’s wife, passed away, at home in Patterson Street, Launceston, on the 2nd November 1895 due to pleurisy and pneumonia at the age of 61. Caroline’s death certificate states her profession as ‘photographer’s wife’.

William died in hospital on the 18th March 1897 of heart disease and syncope; aged 60 years and is buried in Launceston. William’s death certificate states his profession as ‘artist’.

Although he died in 1897, William was also listed as a photographer in Queenstown, Tasmania from 1899 to 1900. This suggests that someone, possibly a member of his family, continued to operate the studio or the directory publishers merely made an error in not removing his entry.

A portrait photograph that was taken by William while he was at Deloraine is held in the State Library of Victoria. Other photos are held in a collection in Archives of Tasmania, www.archives.tas.gov.au NG2436 ATKINSON FAMILY.

Frank Pousty’d letter that he wrote from Ningpo, China in 1933

Some of William’s Descendants

A few notes about William’s descendants are really interesting:- 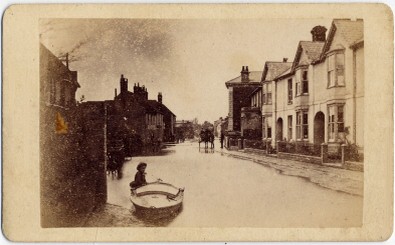 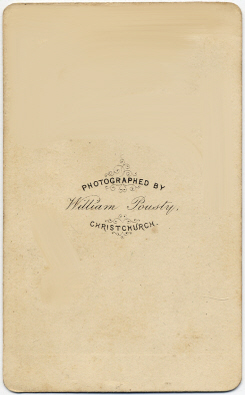 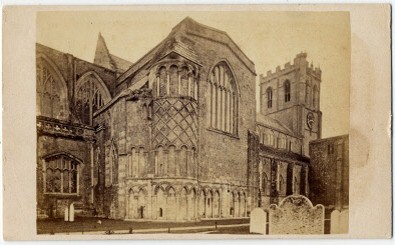 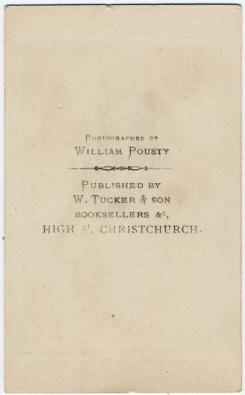 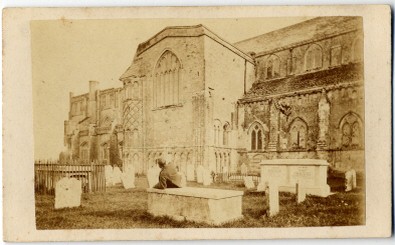 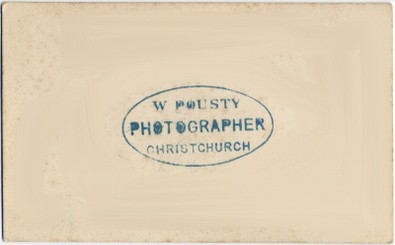