Marcus Guttenberg practised as a daguerreotypist in Hungary, Prussia, Poland and Germany before starting his photographic business in England from about 1851 onwards.

He operated from about 24 different studios in the north east of England before moving to Bristol and eventually moving on to the Manchester area.

Marcus died in 1891; although studios continued in his name until at least 1895 as borne out by the London Gazette.

Operating dates are available for most, but not all, of Marcus’ studios.

1861 – age 36, in Scarborough with Elizabeth and three children(occupation – photographic artist)

1881 – age 51, in Chorlton on Medlock, Lancashire with Henritta (sic), six children a servant and a nurse (occupation – photographic artist)

1891 – age 62, in Chorlton on Medlock, Lancashire with Henrietta, six children a servant and a nurse (occupation – photographer)

Marcus Guttenberg was born in 1828 in Wloclawek, Poland (which was then ruled by Russia) to Marcus (senior) who was a schoolmaster.

There was a George Gerson Guttenberg, also a photographer, born in Wloclawek, Poland, in about 1830 who could have been Marcus’s brother. He lived in Gloucestershire in 1871.

Marcus is known to have practised as a daguerreotypist in Hungary, Prussia, Poland and Germany before arriving in England prior to 1851.

In 1851 Marcus Gatenberg (sic), aged 23, was lodging with Ann Turner (age 77) in Carlton, Selby where Elizabeth came from and his occupation was given as ‘glazier’.

In 1852 Marcus was advertising a studio at 19 London Road, Derby.

Marcus married Elizabeth Pheasant on the 3 January 1853 at Carlton in the district of Selby and on his marriage certificate his occupation was stated as ‘daguerreotypist’. Elizabeth was about eight years younger than Marcus and was the daughter of William Pheasant, a gunsmith from Snaith in the East Riding of Yorkshire. 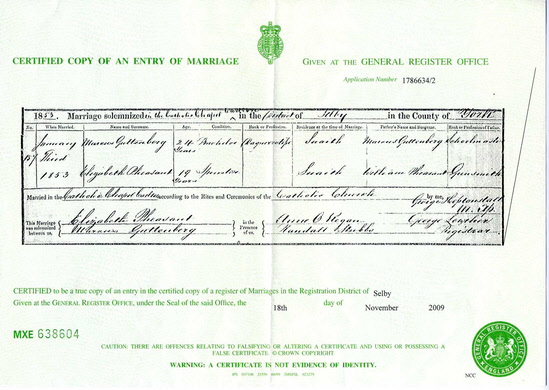 Their first child, James Guttenberg was born in1854.

In 1854, Marcus set up a temporary studio in Harrogate and later, in 1855, at Malton (North Riding of Yorkshire) and by 1856 was at both Market Place and Promenade at Bridlington on the East coast.

In 1858 he was advertising as being opposite the Royal Hotel in Filey and by 1858 he was living in Scarborough and advertised his studios at 9 St. Nicholas Street, Scarborough and at Westborough, Scarborough in trade directories in that year. He referred to himself in advertisements as ‘Herr Guttenberg, artist from Berlin with eighteen years experience’. He said his portraits were ‘acknowledged to be equal to the best of London or Paris’.

Marcus and Elizabeth had a son, William, who was born in Scarborough about 1859.

In 1857, 1859 and 1860  he advertised his seasonal availability ‘opposite Field House’ in  Whitby where he offered calotype or Talbotype portraits on paper or ivory (see ‘Whitby Photographers, their lives and their photographs from the 1840s’ by Ruth Wilcock – page 15).

In 1861 Marcus was at Falsgrave Walk in Scarborough whilst he still had his studio there at Westborough. Interestingly he still visited Whitby every Thursday and took photos at Mr. Consitt’s Photographic Gallery in Skinnergate. His advertisement stated that ” As Mr G will only be in Whitby one day a week, Thursday, he will take the negatives in Whitby and finish them in Scarbro’ when the pictures will be ready by the Thursday following, or sent by post, if required”  (see ‘Whitby Photographers, their lives and their photographs from the 1840s’ by Ruth Wilcock – page 15).

In the census of 1861 Marcus was living at 7 St. John Street, Scarborough with Elizabeth and their three children James Guttenberg (7), Annie Guttenberg (5) and William Guttenberg (2). Marcus was a ‘photographic artist’.

In 1862, it appears, from a legal notice issued in 1890 in respect of a dispute regarding Elizabeth’s father’s will, that Elizabeth left Scarborough and moved to Paris – see below.

To date, no record has been found of the death of Elizabeth Guttenberg nor the marriage of Marcus to Henrietta. Therefore it is possible that Marcus and Henrietta were not able to get married. Henrietta Pflaum was born in Rawicz, Poland in 1845 and Marcus and she had nine children together.

Marcus appears to have been advertising a studio in Stockton on Tees in 1867 and in other places in the area such as Malton, West Hartlepool, Beverley and Hull (Kingston on Hull) although the relative dates are not known and it also appears he may have been in business with a Mr. Hoggard as ‘Guttenberg & Hoggard’ in the towns of Darlington and Stockton on Tees.

By 1866 Marcus had moved to the Bristol area and advertised a studio at 27 Triangle.

About 1867, Marcus and Henrietta had a son, Charles Marcus Guttenberg, who was born in Bristol and later, at the age of 15, was recorded as a photographer.

Beatrice Hester Guttenberg was born in 1867. followed by Edward Norman Guttenberg in 1869 but unfortunately he died the same year.

In 1869, Marcus took on an apprentice called William Friese Green. Friese Green went on to become a very famous photographer in Bath and the West Country. He also was an inventor and was very involved in early cinematography.

Edward Norman Guttenberg was born in 1869 but unfortunately he died the same year.

Early in 1870, Marcus moved studio again, this time to 17 Royal Promenade in Clifton where the family lived on the premises. The 29 Triangle studio continued in operation but was run by Robert Easton under the trading name of M Guttenberg. We can only surmise what sort of reasons there were for Easton not trading in his own name. The advertisement below dated June 1870 shows that Marcus was ‘late of 29 Triangle’. A subsequent notice in July 1882 declared that Easton was bankrupt whilst trading as M Guttenberg. 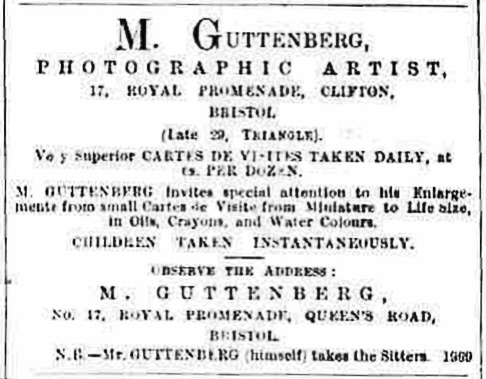 Nora Blanche Guttenberg was born in Bristol in 1875.

Between 1876 and 1878 when Marcus was at 17 Royal Promenade in Clifton he produced the new chromotype photographs under license. The process presented rich shiny brown images which were permanent and have certainly stood the test of time. An example is shown below which still has its protective tissue attached.

Marcus Guttenberg had an inventive mind and filed his own patent no. 1502 in 1878 relating to photo mechanical printing. 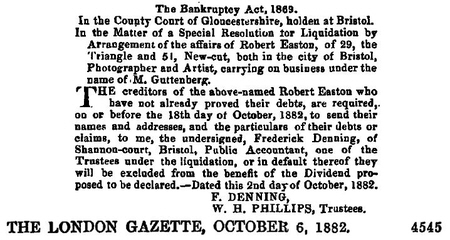 It is possible that Marcus’ son, William, ran the 29 Triangle studio after Easton’s bankruptcy as he later took the studio over in his own name in 1887 and ran it until 1892 – see below.

Meanwhile, Marcus had moved to Manchester by 1878 where his son Maximilian Lionel Guttenberg was born.

In the 1881 census he was living with Henrietta (Henritta) and 6 children Charles Guttenberg (15), Beatrice H Guttenberg (14), Alexander P Guttenberg (10), Nora D Guttenberg (6), Maximulian L Guttenberg (3) and Violet L Guttenberg (baby). Also in the household was a servant and a nurse. There is no record of James (27), Annie (25) nor William (22). They were all at 361 Oxford Street, Chorlton on Medlock, Lancashire which was the same address as his studio.

By 1884 he had moved his studio to Kensington House, 316 Oxford Street, Manchester and this is the address shown on the back of the photo of his youngest child, Daisy. He advertised that studio from 1884 to 1890.

Also from 1884 to 1890 Marcus had another studio at Central Chambers, 26 Victoria Street, Manchester. 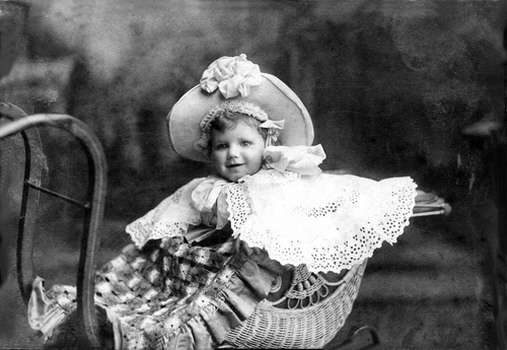 Marcus lodged a second patent no. 10145 in 1890 regarding photo finishing.

In the 1891 census Marcus was with Henrietta and had 6 children both from his first marriage and his second marriage. William Guttenberg (32), Charles Guttenberg (25), Beatrice Guttenberg (23), Percy Guttenberg (20), Violet Guttenberg (10) and Daisy Guttenberg (6). Also in the household were Christiana Brown and Dorothy Fleming who were probably servants. 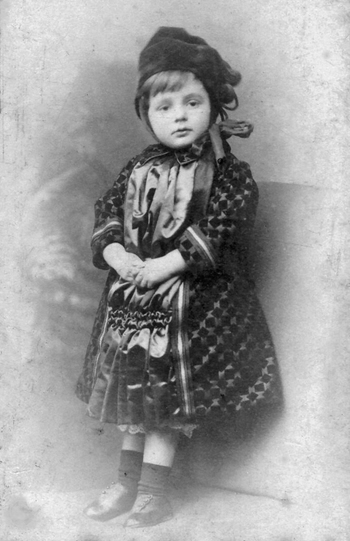 Marcus died on the 11 June 1891 in Manchester, being quite a bit older than Henrietta and his studios continued in business managed by his son Alexander Percy Guttenberg.

Also, interestingly, photographs were registered at the National Archives in Kew in the name of Marcus Guttenberg in 1892 – see below:

By 1895, Henrietta was on the electoral roll as living in 37 West End Lane, Kilburn

In April 1895 the firm of M Guttenberg Limited was declared insolvent and was being wound up – see below. 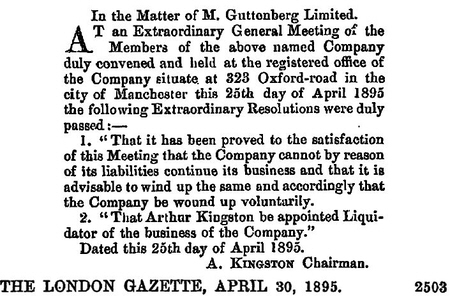 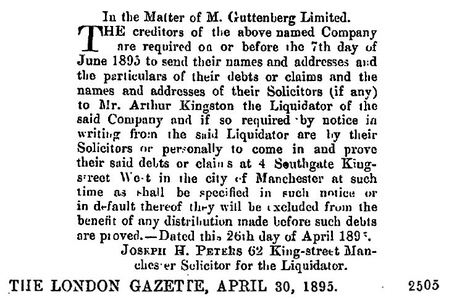 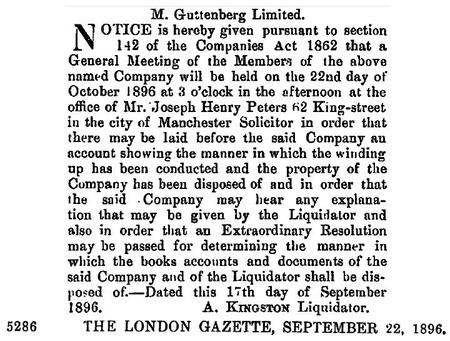 Although he had died by 1895, a studio appears to have been advertised in his name in London at 50 High Road, Kilburn but corroborating evidence has not yet been found for this trade directory entry.

In early 1896, Marcus’ son Charles died in tragic circumstances -see below – was this perhaps related to the demise of the family firm, M Guttenberg Limited? 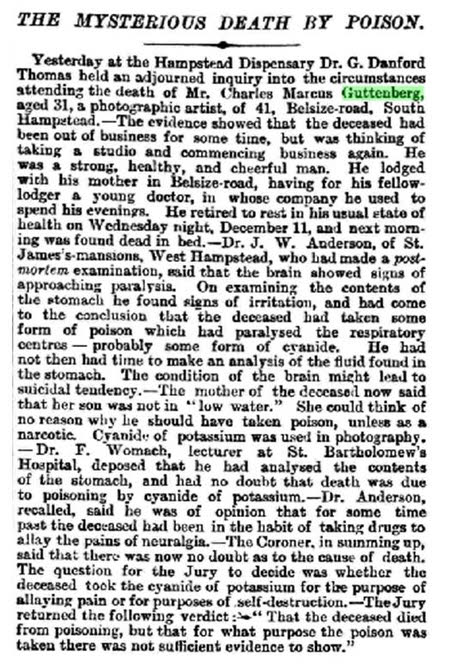 Following Marcus’ death, Daisy moved with her mother Henrietta to Willesden and was working as a photographic assistant.

In 1897 Marcus’ daughter, Beatrice Hester Guttenberg, was on the electoral roll at 41 Belsize Road, London NW

By 1901 Henrietta was keeping a boarding house in Willesden. Living with her were Beatrice (31), Violet (20 – a photographic assistant) and Daisey (sic) (16). Also in the house were nine other people, presumably lodgers.

Henriette Guttenberg was listed on the electoral roll at 35 Brondesbury Villas, Kilburn, London NW in both 1905 an1906.

My brother remembers being told that our grandmother, Daisy, went to finishing school in Belgium. 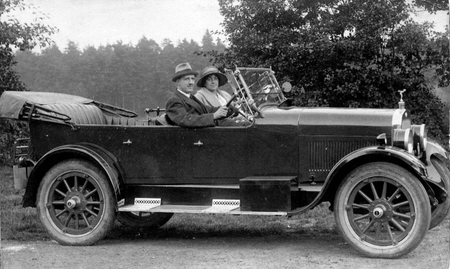 Daisy and Alec Power in a smart motor in about 1920

In 1911 Alec and Daisy Power were living with two sons (one of them my father) in Kentish Town. In Kelly’s Directory for 1939 Alec Power was a photographer at 47 Station Road, Birchington, Kent. In 1954 Alec and Daisy celebrated their golden wedding in Addlestone, Surrey. Alec died in 1955.

Alec Power was born in 1876 in Islington. He had two sisters and a brother. I only just remember my grandfather, Alec Power. I remember the golden wedding. I remember my grandmother, Daisy, quite clearly. She didn’t talk about her past, and I had no idea until I did my research, after finding all the family photos after my parents died, that my great grandparents came from Poland. It was as if she didn’t want anyone to know. Wloclawek had a flourishing sizable Jewish population for hundreds of years so maybe they were Jewish. Although I had Jewish friends, if she did have Jewish connections she never mentioned them. I was only aware of one of her siblings and that was her sister Violet. The others were all quite a bit older and were probably children of Marcus’s first wife.

• Alexander Percy Guttenberg (known as Percy Guttenberg) – Marcus’ son – who has photographs in The National Portrait Gallery and in John Hannavy’s book ‘The Victorians and Edwardians at Work’. He specialised in portraits of actors and actresses

Examples of Marcus’ photography are shown below.