Edmund Huther first advertised his photographic studio in Londonderry, Northern Ireland in 1865 and remained in that city until his death in 1877 at the age of only 33.

His wife, Mary, took over the business and ran it until at least 1882 as well as opening a studio in Letterkenny, over the border in County Donegal in Eire.

1861 – census destroyed by order of the Irish government

1871 – census destroyed by order of the Irish government

1901 – Mary Huther (Edmund’s wife), age 57, at 16 Brown Street, Glasgow with her sons James and Edmund and with her daughter Mary Mckeown who had 2 sons, Joseph Huther aged 8 and Edmund Mckeown aged 4.

Edmund Huther was born between January 15th 1841 and January 14th 1842 (according to his gravestone) in Dublin, Eire. His parents were named Edward Frederick Huther and Mary Huther but little else is known of his parents nor his early life as his birth certificate has not been located and census returns from Ireland from that period having been lost or destroyed many years ago.

Edmund opened a photographic studio in Foyle Street, Londonderry when he was about 21 years old and first advertised it in trade directories in 1865. His advert at that time, according to the excellent book ‘A Century in Focus’ by W A Maguire, stated :-

A marriage record, which appears below, relates to an ‘Edmond’ Huther and states that he married Mary Clarke in Londonderry Roman Catholic Church on the 21st June 1866. It is thought that Mary was born about 1844 in Londonderry.

Edmund’s and Mary’s fathers are recorded as Huther and Clarke respectively but no fore names are given. The witnesses were Mr Douglass and Mary Jane Douglass. 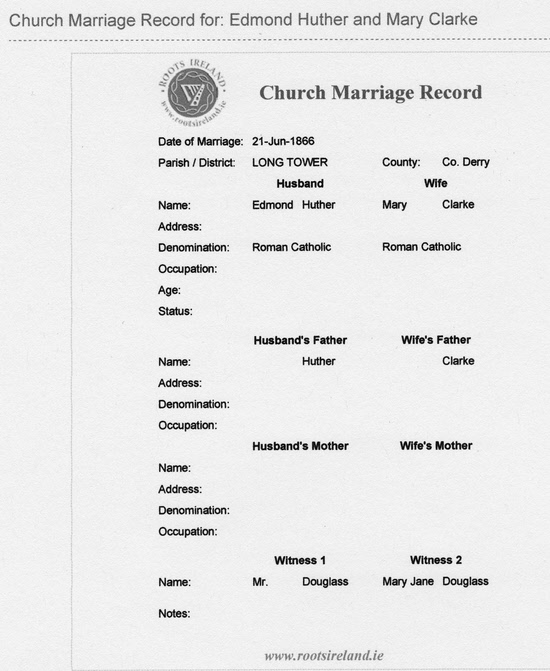 Edmund’s studio appears to have been next advertised in 1878 and by that time it had moved to the Derry Photographic Studio, 18 Carlisle Road, Londonderry (which is now, in 2012, a hairdressers). However, Edmund died in 1877.

Edmund died on the 14th January 1877 and ‘Letters of Administration of the personal estate of Edmund Huther late of the City and County of Londonderry Photographer deceased who died 14 January 1877 at same place were granted at Londonderry to Mary Huther of Londonderry aforesaid the Widow of said deceased.’ See www.proni.gov.uk Unfortunately no will details are available but Edmund’s estate was valued at ‘under £600’. 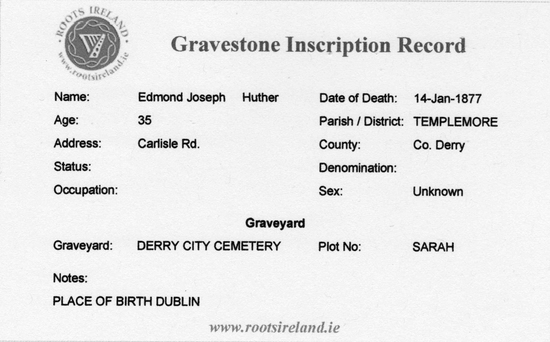 After Edmund’s death, Mary kept the business going for a couple of years in the same studio as she advertised from 1880 to 1882. She also advertised a studio in Letterkenny, a town across the border in County Donegal in Eire.

However, by 1891 Mary was living with her family in Toxteth Park, Liverpool in England and her eldest son James, then aged 26, was shown as a photographer.

By the time of the 1901 census, Mary Huther, age 57, was living at 16 Brown Street, Glasgow with her son James who was working as a railway porter – obviously having given up his father’s and mother’s profession. Also in the household were her son Edmund and her daughter Mary. Mary, who was now named Mary Mckeown, had 2 sons, Joseph Huther aged 8 and Edmund Mckeown aged 4.

NOTE – research is still ongoing re the Huther family and all comments and additions are very welcome.

Examples of Edmund’s photography are shown below:

Examples of Mary’s photography are shown below: