John William will have worked for his father in the family photographic business and he took over one of his father’s studios in the early 1860s.

John was listed as a photographer in the 1881 census and again on his death certificate in 1890.

He does appear to have been involved also in cigar making around the early 1870s.

John’s surname was spelt in several different ways in different records throughout his lifetime.

John William Covell was born on the 10th May 1840 at the City of London lying-in Hospital, City Road, London. His mother was listed as Eliza Coville (note the spelling), formerly Benfield, and his father as William Coville  a baker. The informant was Mary Widgen (matron).

On 23rd February 1863, at the age of 22, John married Elizabeth Slater, also 22, at the Parish Church of St. Philips, Stepney, London. His occupation was given as photographer and their address as 13, John Street, Sidney Square, London E. John’s father, William Covell, was also listed as a photographer. Witnesses at the wedding were Francis Burcham and Emma Slater – interestingly Francis Burcham was also a photographer in London at 123, White Horse Lane, Stepney, London E (advertised 1884).

John’s father was involved in various photographic businesses in London – for more details – see William Covell – and John almost certainly worked with him for a while before he took over one of his father’s studios at 113 Whitechapel Road, Stepney, London in 1865 (?) The studio last advertised in 1867 but may well have remained active after that date.

In the 1871 census John’s job had changed from photographer to cigar maker, this often happens as mouths have to be fed and rent has to be paid. Also, the last entry on the family list, that of Alexander proved a stumbling block. It has now been ascertained that this is an error. Names are sometimes mis-spelt or mis-interpreted on some of the census forms and, on checking and re-checking this entry, it is thought that it should read Alice (Maud) aged 2.

It was said in the family that John William took many photos in Whitechapel and Spitalfields and was working as a photographer during the Ripper murders of 1888.

John William Covell was still described as a photographer when he died (at the age of 49) on the 6th January 1890 at 19 Bath Gardens, Whitechapel, London. The records show that he died of bronchial asthma. The informant was his widow Eliza (Elizabeth) Covell.

In the 1891 census Elizabeth Covell was still living at 19 Bath Place with her seven children.

Ten years later, when the 1901 census was taken, Elizabeth had moved in with her daughter Alice Maud Covell and family at 98 Lower Clapton Road, Hackney, London.

It is interesting to note that Alice Maud worked as a matchmaker. She was employed by Bryant and Mays in the Mile End Road, Bow, London and is most likely to have been involved in the ‘infamous’ 1888 match girls walk out, in which they demanded higher pay. Newspapers of the day led with the headlines ‘Match Girls Go On Strike’ and ‘Striking Match Girls Stage Walkout’.

See below for a picture of Alice Maud. 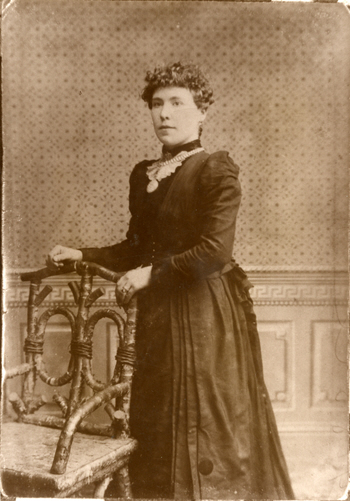 Alice Maud died on 6th March 1927 aged 58 after a short illness (cause of death – congested lungs) most probably as result of working in the Bryant & Mays match factory. Many of the workers died early from breathing in the acrid fumes etc which resulted during the process of match making.

This info looks like it was taken from the 1881 census but does transcribe clearly the place of Elizabeth’s birth, Wellclose Square, which was unclear on the census information.

Further examples of John William Covell’s work would be welcome. If you can help, please Contact Us.