Photographic Business
William opened his first studio in London in 1854. He was involved in about 10 studios in London either working alone or in conjunction with others (see below). His last known advertisement for a studio appeared in trade directories in 1867.

William Covell was born about 1801 in Kennington, Surrey. Details of his parents and his early life are not yet known.

William married Eliza Benfield on the 29th August 1825 at Fulham, Middlesex. Eliza was born in 1808 in St. Clements, Ipswich, Suffolk.

The earliest work details relate to 28th June 1838 when William, an engraver at the age of 36, was commissioned by a London newspaper to do a panoramic engraving of Queen Victoria’s ride from Buckingham Palace to Westminster Abbey for her coronation in 1838. The engraving (see below) was printed and published by E. Elliot, 14 Holywell Street, Strand, London.

He also did another engraving of Queen Victoria leaving Buckingham Palace for her coronation (see below) which was kept in the Covell family for a hundred years. 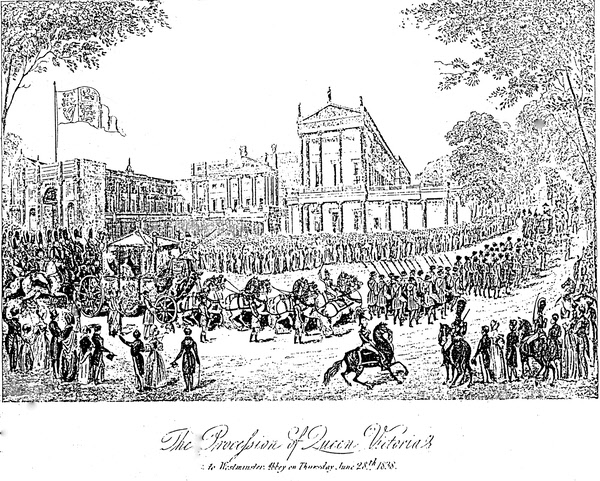 On the 100th anniversary of Queen Victoria coming to the throne William Henry Weston, the husband of Alice Maud Covell, sent the print of the engraving to the Royal Family in Windsor. The family still has a copy of a letter sent to William Henry Weston from Windsor Castle dated 8th February 1937 thanking him for the print – see below. 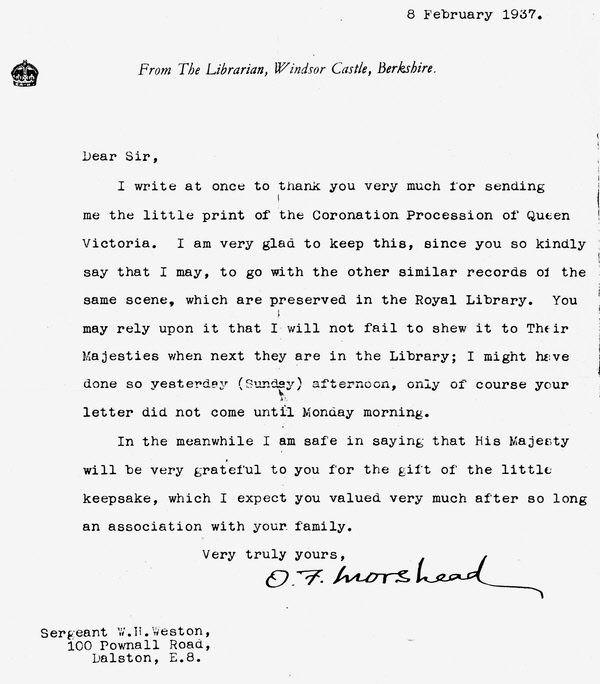 In 1840, William and Eliza’s second child, John William, was born, he later went on to become a photographer himself. William is described as a baker on his son’s birth records and so appears to have been a baker as well as an engraver/ photographer.

In the 1841 census William and Eliza (Elizabeth?) Covell (spelt Covele) are recorded as living at Fashion Street, Whitechapel with their 13 year old daughter Caroline and their one year old son John (John William).

In the 1851 census, William, age 50, was at 121 Petticoat Lane, Whitechapel, London with Eliza his wife and their son John (John William) aged 9. William is listed as a baker.

Many of the engravers became the early photographers in the 19th century which is why the Covells are referred to as photographers/engravers and in 1854, William’s first photographic studio appears to have been at 83 High Holborn, Holborn, London.

In 1855 he was advertising a business styled Covell & Thompson in a studio at 297 Oxford Street, Westminster, London in conjunction with Robert Winter Thompson. A further studio was opened at 137 Edgware Road, Paddington, London in 1856 and yet another in 1858 at 312 Oxford Street, Westminster, London. The partnership was dissolved in January 1859 (London Gazette 1859 p 187) and Thompson took over all three studios which he ran in his own name along with eight others in the 1860s and 1870s

By 1856, as Bonner & Covell, he had gone into partnership with George Bonner at the same address. By 1858, they appear to have moved to 86 Whitechapel Road, London E and Bonner dropped out of the partnership in 1861, William was advertising in his own name at that address in 1862 and by 1863 he had sold out to Robert Winter Thompson (see below).

In 1858, William went into partnership for a short time with George Bonner and Robert Winter Thompson under the trading name of Bonner, Covell & Thompson with a studio at 105 St George’s Street, St. George in the East, Stepney. This partnership was also ended in January 1859 according to the London Gazette. Bonner, Covell and Thompson also took over Arthur Brookes studio at 312 Oxford Street, Westminster in 1856 which, in 1858, was transferred to Covell & Thompson (see above).

William appears also to have been a baker as well as a photographer. He is described as a baker on his son’s birth records in 1840 and again in the 1861 census.

However, in 1863, William was described in his son’s wedding records as a photographer.

Eliza died in the Jul-Sep quarter of 1864 in Whitechapel – volume 1C page 309. The dates of William’s retirement and death are not yet known.

At present we do not have any images by or of William John Covell – can you help? If so, please Contact Us.