Business
Established  in1891. Albert retired in 1933.
Studio operated at Southport and thereafter worked in various places in India.

Census
Not yet available

Albert Edward Jeakins was born in 1867 in Buckden, Huntingdonshire. He spent much of his youth in Halifax, Yorkshire and may well have learned his photographic skills from Thomas Storey Davis (his brother in law who married his sister Isabella Maria Jeakins in 1886) of Davis & Sons who had studios in Halifax, including one at 4 Silver Street.

By 1891, at the age of 25, he had opened his own business at 25A Lord Street, Southport and advertised in local trade directories there in 1892.

Also, in 1891, he married Alice Maria Hunt in Southport.  There were no children and they separated soon after in 1895.  The marriage was eventually dissolved in 1906.

Sometime after July 1895 Albert left for India. He was certainly in India in 1897 (two books of his had ‘Bangalore 1897’ written on the fly leaf). He worked for Bourne and Shepherd, a top Indian photography firm, and was listed in a commercial directory in 1901 as an assistant at their Chowringee Road studio in Calcutta.

Albert returned to 8 Silver Street, Halifax in England in1904 to arrange his divorce which was eventually finalised in 1906. This may have been in anticipation of a second marriage which he planned would take place in India.

He returned to India and from 1905 was listed in commercial directories in Simla as a ‘Photographer and Fine Art Dealer’.

Albert married Norah Emily Dwyer in Simla in December 1906.  Adrian Edward was born in 1907 and went on to be a cinematographer in the British Documentary Movement. Cynthia was born in 1912.

Regretfully, Norah left him in January 1922 but he continued to live in Simla, working as a photographer until his retirement and return to England in 1933.

Compiled by Ron Cosens
Thank you to the Jeakins family historian John Jeakins for his valuable contributions and assistance. 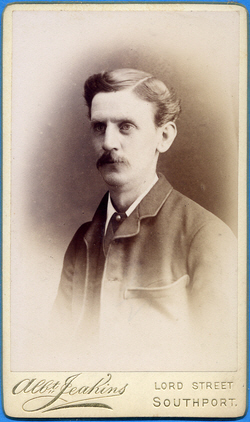 Additional images by A E Jeakins are welcome. If you have any, please Contact Us. Thanks.